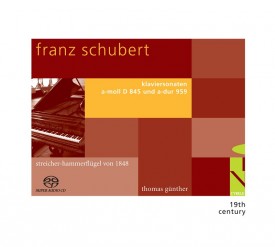 This is a fascinating and lovely disc of two very contrasting sonatas by Schubert. Cybele are to be congratulated for this pioneering example of the use of period instruments in Schubert on SACD - it is not only a worthwhile experiment but an artistic success. The clarity of tone that the fortepiano brings to this music really helps the detail come through in the densest of Schubert's forte passages and is never overwhelming in volume in the way that a modern Bösendorfer or Steinway can be in the wrong hands. Thomas Günther himself is exploring here as his more usual performances comprise works of the avant garde but he has recently discovered the joys of period performance.

Throughout Thomas Günther plays with great clarity which he marries with largely tasteful rubato (although one or two moments in the Scherzo sound a little contrived) and faithfulness to Schubert's music. The opening work in A minor is a very stormy affair only offset by a tender variation movement Andante poco moto. The way this movement has its theme balanced by the "counter-melody" (similar to the comparable movement in Beethoven's 7th Symphony) is judged wonderfully - the focus is constantly changing from the one to the other and Günther plays real games with us! The opening movement has moments of temporary calm too but there is no doubt that they are merely Schubert gathering musical breath before the final onslaught ensues. The pacing Günther gives is very well judged and builds relentlessly to the final climax. The other relatively calm moment occurs in the midst of a very unsettling Scherzo, whose repeated figurations & fragmentary sections have made a mockery of some notable names in concert but fortunately not here! All repeats are included here with a largely convincing sense of momentum until the final sounding occurs. The interlude of the Trio is a balm to the senses and gently rocks in Günther's hands. The Finale is then dispatched with tremendous vigour, especially in the coda where the tempo is really pushed on extremely excitingly.

The overall calm of the A major sonata then comes as a relief to the soul. Günther manages to conjure near orchestral colour in the opening movement (with deep "pizzicato" bass notes and an almost harp-like texture in the arpeggiated figurations) as well as pacing it very well indeed. This sonata is like the alter-ego to the A minor and where storms clouds were overhead there, here the sun is shining! That is not to suggest that Günther underplays the moments of emotional angst; indeed the second movements pained beauty is movingly presented. The Scherzo then dances away as though the troubled soul revealed in the previous movement had never existed. The Finale meanders gently through the notes but in the coda Günther steps the tempo up to make an exciting end to this glorious music.

The notes are from Thomas Günther himself and chart his relationship with 19th century music in general, Schubert in particular as well his "conversion" to HIP (by playing the same instrument as recorded here) and the music included on the disc. There is also, fittingly, a section from the instruments restorers with a short history of the firm that manufactured the instrument (some of whose family were taught by a certain W A Mozart!)

The sound is warm and set back without being distant - a nice blend in which the hammers are inaudible but a multitude of tone colours are captured beautifully. The musicianship might not be the last word in Schubert playing but it is most enjoyable and I have already returned to this disc with pleasure several times.