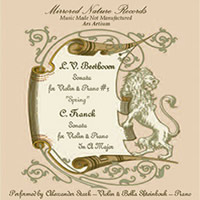 This disc from newcomers (both as performers & as a company) Stark, Shteinbouk & Mirrored Nature Records has two major disadvantages: the performance is not anywhere as great as can be achieved from masters like Kyung-Wha Chung or upcoming musicians as heard on Franck, Debussy, Tchaikovsky - Liza Ferschtman in the Franck or like Beethoven: Violin Sonatas 5 & 9 - Perlman / Ashkenazy in the Beethoven, nor is the recording anything like state-of-the-art except for the balance achieved between violin and piano.

The performances have to be judged against the best that is currently available (on both SACD as well as other formats) and sadly they just don't compete. To this listener, there is no audible ecstasy from the performers beyond the irrepresible spirit with which Franck imbued his sonata. There are audible mistakes from both pianist and violinist which, these days, is uncompetitive for a studio recording (especially when there are some single-take concert discs that don't have any). The Beethoven fares better and Stark & Shteinbouk at least avoid the mannerisms that plague Mutter's cycle (an excerpt may be found here: Beethoven: Violin Sonatas 5 & 9 - Mutter / Orkis), however no matter how charitable one may wish to be welcome a newcomer to SACD, this cannot compete with the likes of the Perlman disc mentioned. From a performance perspective, I cannot wholeheartedly urge people to part with their hard earned cash for this disc.

The sound is the major drawback from my point of view, because whilst the performances are not exceptional, they at least play without mannerisms in very enjoyable music. However, the studio they chose must be one of the driest in existence on the planet. The sound of the Beethoven compares favourably with Fritz Kreisler's cycle but as this was made over 70 years ago, one should reasonably expect this to be the case! The nearest thing I have heard to this in person is that of a conservatoire's practice rooms; this also fits my feelings about the quality of the performances too. As a consequence, the overtones from the violin are "stolen", and the piano sounds very thin in tone (not something I'm sure would still be true were it relocated). What really doesn't help here is the lack of MCH, at least that would have provided a little bloom - instead here the sound dies immediately and quite unnaturally. 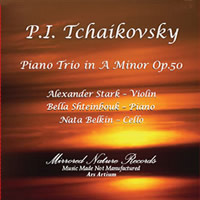 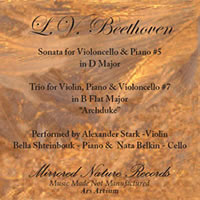