Thank you for that review Contrapunctus! Ugh, I can't believe I'm going to spend so much money just to get the two titles RCA/Sony did not release individually. Makes me ... 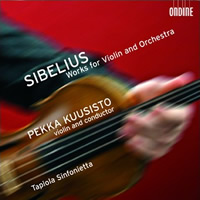 
For lovers of Sibelius's famous Violin Concerto, this CD offers the ideal opportunity to discover his less-performed works for violin and orchestra, played by the celebrated Finnish violinist Pekka Kuusisto.

Described by The Guardian as "absolutely mesmerising", Pekka Kuusisto is one of the most cutting-edge violinists of his generation who performs with the major orchestras in the world and is acclaimed for his tone, technique, infectious enthusiasm and his imaginative interpretations. He embarked on his international career in 1995 at the age of nineteen, when he became the first Finn to win the Sibelius Violin Competition. His début album, featuring Sibelius's Violin Concerto, earned gold status in Finland and the Music Industries Association Award for Excellence 1996 (ODE 878-2, or coupled with Sibelius's Complete Symphonies, ODE 1075-2Q).