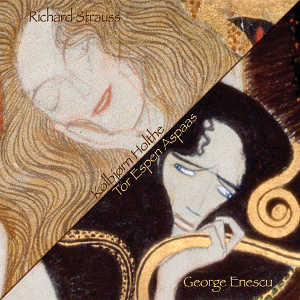 
Richard Strauss' first and only sonata for violin and piano and George Enescu's third, the former as radiant, heroic and sublime as the latter is dark, melancholy and feverish; it is in their transcendent qualities that the two sonatas are related. Both works signify an important milestone in their respective creators' development as composers; they also constitute milestones in our own development as instrumentalists, both individually and as a duo.

I love exploring the by-ways of classical music. I have a very large collection of music by second and third-tier composers as well as the lesser-heard works of many of the majors. This rcording is a case in point. Richard Strauss is an acknowledged master of the big orchestral statement. While he did compose quite a lot of chamber music (mostly youthful works), it is rarely heard or recorded. The present sonata for violin and piano, composed in 1887 at age 23, was his sole contribution of this nature (several smaller viloin & piano pieces exist) and is by far his most recorded chamber piece. It is a late-romantic work that reminds me a bit of Max Reger which is to say that the melodies aren't all that memorable. Nevertheless, it is a well-constructed three movement work with just enough sturm und drang to make it interesting. It also helps that the present duo, in their first recording together despite having joined up as long ago as 1991, extract all that is possible from the page. This performance is as fine as any I have heard.

Enescu's third violin sonata came 40 years after the Strauss. Written at the age of 45, this is the more exotic and interesting work. Overall it is a darker sounding piece with lots of Oriental and Jewish character. I like the way violinist Holthe executes the numerous glissandos to such good effect. The use of quarter tones gives it a much more modern feel than the Strauss though it is a tonal work based in A minor. Again, this duo plays it extremely well.

2L have done another wonderful job capturing these performances. Recorded in 2005 in an Oslo church, the sound it well balanced between the instruments and with a very nice balance of direct and hall sound. I am one who does not like small ensemble recording to be too distant in nature and thankfully this one is done just about perfectly. The violin is very well recorded with all its harmonics intact but never sounding harsh or over the top. The one quibble I have is that the Steinway piano could have been a bit more brilliant sounding in its top octaves (not sure if this is the piano itself or the recording technique used on this occaision). It seems to me that this comes from a PCM master because I don't hear the last degree of sonic purity that I do from a DSD master but this does not hinder my enthusiasm for this release. Very highly recommended! Please buy a copy to support these wonderful musicians and this enterprising record label. I personally would love to have more "by-ways" from Holthe/Aspaas and 2L!

Strauss’s only Violin Sonata and the 3rd Violin Sonata of George Enescu make a well-contrasted coupling. The former is a young man’s music, confident, thrusting and affirmative; the latter often dark and restless, its Romanian folk-inspired melodies tinged with sadness.

The witty use of the Klimt on the front cover illustrates the mood and character of both works perfectly.

Strauss wrote his sonata while working on his first two tone poems Macbeth and Don Juan and it received its first performance in October 1888. It is with this piece that Strauss finally turned his back on chamber music and it does often seem to be conceived more in orchestral terms rather than for just two instruments.

Kolbjørn Holthe and Tor Espen Aspaas play the opening movement of the sonata with an expansive line, and if they lack some of the panache of Kyung Wha Chung and Krystian Zimerman on DGG (RBCD only) their attention to the lyrical aspects of the music is most winning, allowing the unmistakably Straussian second subject to soar magnificently. The second movement, whose piano part suggests the accompaniment to a Strauss song, is played with touching tenderness, while the underlying weakness of the finale is easily ignored thanks to this Duo’s spirited playing.

The Enescu sonata is a fascinating piece and it is wonderful to have a modern recording of it on SACD.
The opening movement sounds almost improvised, a nostalgic meditation on the character of the folk music of Enescu’s homeland. It moves between introspection and lively dance rhythms. The Adagio of Bartok’s Music for Strings Percussion and Celesta is brought to mind by the eerie opening of the second movement, but after some very oriental sounding violin passages, it becomes more animated before finally reaching a wonderfully tranquil close. Holthe and Aspaas handle the fireworks of the finale with a breathtaking virtuosity, and the fearsome technical difficulties of the piece as a whole seems to present no difficulties for either of them. This is a truly astonishing performance.

The 24bit / 44.1kHz recording, made in the Sofienberg Church, Oslo, which seems to be 2L’s favourite venue for small scale works, is excellent and achieves a well-nigh perfect balance between the two instrumentalists. Also, the benefit, in increased realism, of multi-channel sound is vividly illustrated when one switches to it from the stereo layer.

If either or both of these works appeal, don’t hesitate to buy this superb disc.

In the Strauss, Kolbjørn Holthe and Tor Espen Aspaas face stiff competition from rightly famed accounts from, amongst others, Chung and Zimerman (RBCD only). On interpretative grounds they match their illustrious predecessors and revel in the fantasy afforded in both the piano and violin parts as well as combining in a seemingly never ending joint rhapsodic music making that is most compelling. This is true chamber music making and a magical feeling envelopes the listener - very intimate and heart-warming.

The Enescu is just as successful with the protagonists managing to convey the different mood of the piece very idiomatically indeed. The folk characteristics are vividly conveyed without ever forgetting a sense of repose that marks this out as being the art music that was committed to paper. Let me assure you thought that Holthe is alive to the nuances of glissandi and other expressive violin technical devices that Enescu would expected to have been employed - they are deployed entirely in the service of the music and there is no feeling of gratuitousness.

As good as previous recordings have been musically, none can have been granted the sound that matches the quality of the performances here - 2L have provided an example of how good PCM can sound; the MCH balance is especially convincing in the perspective and balance. The walls just vanish as in all the best recordings of the genre.

The subtitle of the essay notes supplied is "The art of transcendence" and that perfectly captures the characteristics of the very fine playing on this superb disc - very highly recommended.

This disc pairs the team of Kolbjørn Holthe (violin) amd Tor Espen Aspaas (piano) in two Sonatas, one by Richard Strausss and another by Georges Enescu.

The Strauss sonata was written by the composer when he was 23, which seems to have a great deal of influence by Beethoven. The team on this disc play these works with ease and the Strauss sonata is a harmonicaly rich, romantic, virtuoso show piece. The violin comes from the center channel and Holthe prefers to use a portamento effect at times and displays a very high singing tone. The work has a youthful vigor and even the influence of Liszt and Brahms can be heard. Although Strauss may have followed traditional sonata forms, the piece really feels more like a fantasia. The music is just as dynamic as it is atmospheric. The opening movement is engaging, the second tender and tranquil, with the finale energetic and lively that shows these performers in a playful dance. Virtuosic flourishes close this sonata.

The work by Enescu was written by the composer when he was 45 and is the much darker and more mature work of the two featuring strong Romanian and Gypsy influences, which is a nice contrast to the Strauss work. The first movement is exotic, colorful and melancholy in spirit. The second movement features virtuosic work by the violinist exploiting various colors and nuances, making the instrument sound darker, then more open, and at times, sounding like other instruments, perhaps a flute or clarinet. The dreamy quality of this movement leads into a lively gypsy dance at its close. The finale is an uptempo rustic dance with plenty of vituosic athleticism from both of the performers. The violin comes from the fronts in this second sonata in a warm and enveloping sound, the piano coming from all surround speakers.

Of both of these works, I think I prefer the Enescu with its darker colors, gypsy rhythms and its experimental qualities exhibited on the violin. These are both excellent performers and hopefully we will see more recordings of them from 2L in the future. When I listen to this disc I prefer to lie down and shut my eyes.

The sound presented here is a fine example of what the 2L team can do. Smooth, warm and natural with a pleasing, open acoustic with violinist and pianist both coming right into your living room. Highly Recommended.