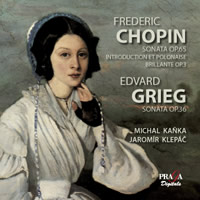 
The last of Chopin’s four sonatas – the first three being for solo piano – has become an essential work in the repertoire of… cellists, taking its place alongside the Beethoven models and the more-immediately lyrical scores of Mendelssohn. Grieg, in the central Andante molto tranquillo of his own Sonata, borrowed from the portrait of Sigurd Jorsalfar (Sigurd the Crusader), incidental music which, owing to its charm and noble bearing, deserves to be as well known as some parts of Peer Gynt. A triptych in chromatic harmonisations as free as they are appealing.

Whilst this will not be the most satisfying musical fare on offer for those sampling chamber music, it is certainly a very enjoyable collection of pieces from some composers who managed to write gorgeous melodies albeit with a slightly fragmentary sense of structure.

Sandwiched between the Chopin and Greig sonatas, comes Chopin's Introduction and Polonaise Brillante which is perhaps most reminiscent of his (solo) piano writing. In common with the sonatas, Michal Kanka and Jaromír Klepác;, play with brilliance and eloquence as called for by Chopin. One can immediately sense the rapport that they have established between each other and one relishes the tender but playful interaction between these two fine artists.

The Chopin sonata is the longest work presented here and opens the disc. The long first movement (which lasts longer than the other three put together) is not Chopin's most inspired composition but the dedicated performance honestly portrays the notes - warts and all - preventing it from being transfigured into a composition that it is not. The Scherzo is dispatched with a pleasing lilt from the cello and brilliant piano figurations before a beautiful and deceptively simple Adagio allows our protagonists to display their wonderful lyrical playing tones. The Finale is a tricky work for the cello as it is required to match a great deal of the piano figuration and Kanka rises admirably to the challenge. This account does not complete efface memories of Rostropovich's towering account with Argerich but many will like (and quite possibly prefer) the simple and natural of Praga's artists.

When listening (with pleasure) to the Greig sonata, one will be frequently surprised by the familiarity of some melodies, even if this is the first hearing of this work. Like the more famous violin sonatas, it was written in three movements and they contain re-casting of theme's that have gained fame elsewhere. The first movement utilises "the" transformed melody of his Piano Concerto (and in a gesture of the heritage, the cello is provided with a mini-cadenza), the second is almost a direct lift from the march in Sigurd Jorsalfar. The third movement sounds like a medley of the Lyric Pieces (although there are fragments that could be matched up, there are no extended phrases) and is hugely enjoyable in such a lively and sensitive performance

The sound balance is wonderfully natural and has a real chamber hall feel to it; the piano tone is full and rounded accompanying a warm (with hints of rosin) cello sound.