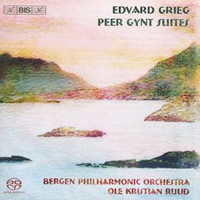 
Since the release of the first volume, (Piano Concerto and Symphony, BIS-SACD-1191), in February 2003, this series has been gathering the most extravagant praise, both for the committed performances of Ole Kristian Ruud and the Bergen Philharmonic – Grieg's 'own' orchestra – and for the sound quality, which has been held up as a model for all labels making orchestral Surround Sound recordings.

With this, the sixth, instalment the turn has come to the Peer Gynt Suites, possibly the best-loved of all Grieg's orchestral music. It is anyway a fact that the instant popularity of Morning Mood, In the Hall of the Mountain King and Solveig's Song has contributed to Ibsen's drama becoming one of the most widely played.

The music that makes up the Suites has already been released in the series as part of the 2-disc set BIS-SACD-1441/42 which consists of a concert version of the play, including the complete incidental music as well as excerpts from the spoken text. The critical response was overwhelming, as exemplified by the reviewer on MusicWeb International who wrote: 'The Bergen Philharmonic Orchestra give exemplary performances under Ole Kristian Ruud, making even the most hackneyed of movements sound new-minted... these discs provide a wonderfully refreshing view of Grieg’s music, in fine idiomatic performances.'

This music has now been re-recorded for this issue – in performances every bit as idiomatic and refreshing – and is coupled with three works that Grieg originally composed for the piano, but later orchestrated. One of these is Bell Ringing, which for a long time used to open the Bergen Festival, and in which Grieg is at his most forward-looking, exploring harmonic innovations and effects that were to be used by the impressionists.

This disc undoubtedly contains some of the most famous music in the world and because of this may well become one the best selling SACD's for BIS. Does it deserve this accolade?

The first suite is most commonly performed in concert and can easily seem hackneyed in lesser hands. Here though, the "Morning Mood" blossoms into being - tender and radiant playing is given by the Bergen Philharmonic to Ruud's disarmingly fresh direction. "The Death of Aase" roots one to the spot because of the marvellously hushed yet intense playing. Then for the utmost contrast, "Anitra's Dance" does just that, unlike some who try too hard. Starting more slowly than many, the "In the Hall of the Mountain King" accelerates to the quickest tempo I have heard by the end - stunning playing and conducting!

The second suite is arguably even more brilliantly played. "The Abduction of the Bride. Ingrid's Lament" opens with real fire before settling to the more soulful section. The "Arabian Dance" (a misnomer in today's world) is played with great grace and style. The most impressive item from a performance perspective must be "Peer Gynt's Homecoming (Stormy Evening on the Sea)"; one can feel the spray lashing the face of Peer such is the power of the playing and conducting. A most delicate "Solveig's Song" rounds off an exceptional performance.

Between these suites and the other large-scale work, the Old Norwegian Melody with Variations, comes the Funeral March in Memory of Rikard Nordraak. Scored only for wind band, it gives the non-string players of the Bergen Philharmonic a chance to shine which they do with great relish whilst keeping the sombre mood.

The Variations are 24 minutes in length and might be considered a model for his later Norwegian Dances and Symphonic Dances. This is not the most memorable Grieg but the Bergen Philharmonic & Ruud make as good a case as anyone might. There are many enjoyable moments along the way even the whole is less coherent than it might be in other hands.

By means of an encore, we are given an orchestration (by Grieg) of "Bell Ringing" from his Lyric Pieces. Surprisingly impressionistic, it sounds at times like a Norwegian Debussy!

This SACD has an exceptionally wide dynamic range and is one of the best SACD's I have heard from a sonic perspective. Bravo BIS!

A demonstration disc in every way.

This is highly recommended 'Peer Gynt Suites' and although recorded about 10 years ago it still holds the first position on a SACD market. Why?
Firstly the (multichannel) mix, how beautiful it really is! There is a pleasant glow which gives completely natural sound field for the listener through six speakers. The rear speakers are used for the ambience in an exemplary manner being perfectly balanced. The engineers have avoided to utilizing them too domineering. The centre speaker creates just a right amount of "stuff" between the front speakers and thus sets the listener on the best seat of Grieghallen.
Ruud's performance seems to be ideal, as well. He has chosen good tempi in order to reach all the details from the familiar score. For instance, 'In the Hall of the Mountaing King' is simply stunning in its slowly increasing pulse. 'Peer Gynt's Homecoming' almost bursts the cold water out of one's speakers whereas 'Åses's death' offers deeply touching listening experience.
Buy this right now, worth of every penny!

I thought for a long time this recording (one could call it as an idiomatic of the Peer Gynt Suites) was recorded entirety in 24-bit / 44,1 kHz PCM, just like most of the BIS recordings in that time. However, according to the eClassical, the original sample rate of track 10 (Klokkeklang) is 176,4 kHz, presumably downsampled from the original DSD master tape for digital download. The booklet does not mention the original sample rates but those listed on eClassical should be correct.

It’s possible to hear a difference between track 10 and the rest contain; DSD recording has more clarity, depth and richness in sound, whereas PCM is offering more rounded and airy soundfield. What a pity BIS moved to record in PCM as DSD simply is more realistic carrier for the sound.

It was a cost decision Robert confirmed at the time, BIS had a large number of recording rigs around the world and could not afford for them all to be converted for DSD recording.

It was thought at the time that a few of the early BIS SA-CD were recorded in DSD including this one. Alas, the Grieg survey (6 SA-CD?) was split between DSD and PCM recordings.

To be fair to Robert, BIS has always highlighted MCh as their forte rather than hi-res. 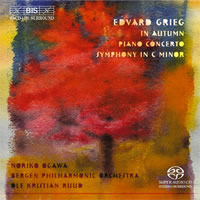 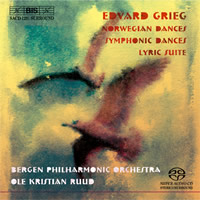 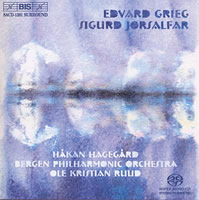 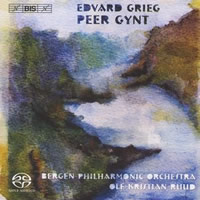 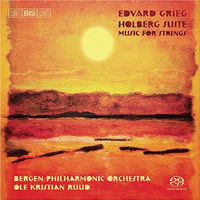 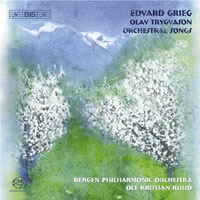