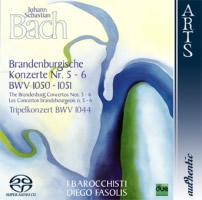 Please refer for general remarks on performance and recording to my review of the first disc in this set of Brandenburg Concertos. Here are my listening notes for the 5th and 6th concertos and the Triple Concerto.

Concerto 5
For solo flute, violin and harpsichord, with an accompanying ripieno group of violins, violas, cellos and double bass/violone. There are several theories about the date and occasion for which Bach originally composed this work; it was possibly to celebrate the arrival of a splendid new harpsichord at the Cothen Court which Bach brought back from Berlin. Bach himself would probably have played the virtuosic harpsichord part - indeed an early version is without the staggering solo cadenza which was added later for the Brandenburg incipit. At the first performance Bach must have improvised during the concerto to show its virtues off to the Duke. (Indeed, Bach's popular reputation in Germany during his life time was that of an improviser and organ-tester.)
Fasolis takes the solo part on this recording, but the harpsichord remains in perspective with the other soloists and is not agressively spot-lit as in some other recordings. The wooden baroque flute blends tonally much better with the gut-stringed violin than does the modern flute made of precious metal, and the unforced tempo of the first movement allows the soloists to interact as if in an animated conversation, which ebbs and flows, with humorous staccato touches. The brilliant cadenza is tossed off by Fasolis as if it presented no difficulties. The 'affetuoso' slow movement is a more intimate and relaxed conversation, touching with its with lovely phrasing and great rapport between the players in their stately dance. A final fugue gallops off towards perhaps a more intellectual discourse for the soloists. This work is often considered to have been the starting model for the solo keyboard concertos of the later 18th and 19th centuries. In passing, I remarked that bringing the keyboard forward with the other soloists also picked up quite noticeable LF "noise" from its action - since the LF channel is used very effectively, but you soon get used to it. Microphones can't help picking up things which ears can filter out.

Concerto 6
This may have been the earliest of the group, as it employs instruments which would have been considered antiques by the time Bach was greeting the Margrave. There are two trios, one with violas I/II and a cello, and sitting opposite, two violas da gamba (really viols with 6 strings) and the violone (a kind of bass viol). Bach takes another calculated risk here, as these instruments are both low-voiced and and dark-toned. I found I Barrochisti made this final movement a real tour de force, with passionate playing of immense richness and intensity, the melodic phrases passed to and fro with great clarity and tonal beauty, full of sunshine despite its lower range. The recording magnificently portrays the nutty and resiny character of the strings, and the characteristic resonances of each instrument: a textural and tonal delight as well as a rich and glowing musical treat. The best possible end to a wonderful set of the Brandenburg Concertos.

BWV 1044
As a generous and appropriate filler, Arts presents us with the so-called Triple Concerto for flute, violin, harpsichord, strings & continuo in A minor, and the minor key marks a change in the character of the music. This is a later work for comparison with the Brandenburgs, probably composed for the Summer Fair evening concerts in a Leipzig square. As with many of Bach's works, material was taken from previous pieces and freely re-worked. The harpsichord again plays a leading part, particularly in the outer movements, where it is the main proponent. In the lovely wistful slow movement, the wooden flute and the violin engage in a pleasant dialogue in architypal Baroque style, commented upon by the harpsichord, while the continuo bass plays the strolling pizzicati. Again, I Barrochisti play con amore throughout. A marvellous end to a very fine set of Brandenburgs which gets full marks from me. 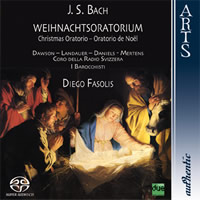 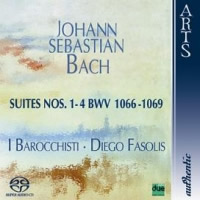 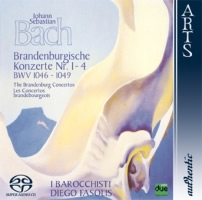 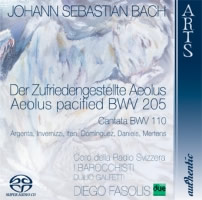