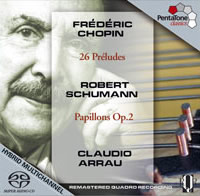 Here is another gem of the historical catalogue rescued by Pentatone Classics for us all to savour. Claudio Arrau was not like many pianists of today – it was never enough for him to merely play all the notes in a display of technique (controlled or otherwise).

The principal work to which Arrau turns his serious mind on this disc is Chopin’s Preludes Op. 28. These fragment-like works can be treated as self-contained compositions in their own right but fare far better when, as Arrau manages here, they can be placed as a broad sequence of glittering gems. From the gloomy second prelude to the electrifying conclusion, Arrau’s pianism is beyond question (although there are moments when a little more delineation of melody and accompaniment wouldn’t have gone amiss); the quixotic moods are captured well and nowhere is the serious approach detrimental to any playful flecks of colour. This is not the most spontaneous playing on disc but it is far from being stilted either. The “extra” preludes are a natural addition to the main work and Arrau continues in the same vein that he left off in with Op. 28.

To finish the disc, we are given Schumann’s Papillons. This is playing of great sensitivity and tenderness but compared to some, like Perahia, Arrau lacks the final touch in fantasy that can illuminate this seemingly facile music.

The sound, from the Concertgebouw, is glorious with a deep, sonorous bass that is clean and never overwhelming. The upper registers of the Steinway piano do not have the crystalline brilliance that some Steinway technicians favour but for the more inward looking and reflective music, the sound is none the worse for this. There is practically no tape hiss to be heard (until vastly unrealistic playback volumes are chosen) and we are fortunate that Pentatone were able to transfer the, obviously very good, master tapes in such a sympathetic manner. One caveat: You can hear the sniff here or there but I was so caught up in the music it barely registered.

Comment, 2015 : When I wrote the original review below for sa-cd.net, there was no other version of Chopin's complete preludes on SACD.
Since then, the Japanese-only EMI SACD of Richter's marvellous 1962 concert recording of Schumann's 'Papillons' has come and gone.
The recent appearance of a Linn SACD [ and download ] which features Ingrid Fliter's Chopin preludes, along with sundry nocturnes and mazurkas makes this newer release a better first recommendation for the Chopin.

Coincidentally, I heard Fliter perform these works in a small Auckland concert hall with a powerful Fazioli concert grand, a year before the launch of her disc. She made numerous small and one major slip when playing these works. After the concert she explained that she was trying these works out for the first time in public since her Chopin competition prize, safely in the cultural obscurity of New Zealand. Happily everything seems to have worked out for the better, as can be heard on this release. Chopin's preludes were apparently not composed as one unified work, but as a compilation of pieces composed during his teens, and then completed with some gems in miniature from early in his maturity. Arrau is at his greatest in the deeper as well as the less athletic miniatures, though his striving over-bulks some of the pieces with slighter frames. Fliter almost matches his profundity while inhabiting more easily all the other moods, from the whimsical to the mercurial, which these haunting works touch upon. Filter's Chopin is shaping up to be one of the modern treasures of classical piano in the high resolution media. I hope she will also be presented eventually on blu ray video.

This PentaTone remastering incorporates most of the pieces from two Arrau LPs released in the mid-1970s. The SACD contains the full LP contents of the 26 Chopin Preludes, but only Papillons from a Schumann anthology which originally also included Opp 15, 19 and 28. Arrau was born in 1903. These performances, recorded in the Amsterdam Concertgebouw between 1973 and 1974 are typical of his refulgent and majestic late style, without much of the ponderousness which afflicted most of his recordings from the late 1970s onwards. During the mid-1970s, when I first started buying records, a clutch of Chopin Preludes appeared from the keyboard lions of the day. These included Ashkenazy, Argerich and Pollini. All three, which I bought with scarce pocket money, are magnificent, virile interpretations, which placed Arrau's deeply considered performances slightly in the shade. I never heard his performances until they were released in one of the three Arrau sets in Philips' quixotic 'Great Pianists of the 20th Century' series. The fact that these performances were considered worthy to be included in this historic anthology speaks volumes for the calibre and representativeness of Arrau's interpretations. This CD makes an interesting comparison to the PentaTone pure DSD remastering of the SACD.

Interpretatively, Arrau is the polar opposite to Argerich. Where the Argentinian is quicksilver, agile, explosive and barnstorming, her Chilean champion is ruminative and powerful, with a rich, golden piano sonority. As a rough generalisation, Arrau is most idiomatic in the slower Preludes, Argerich in the fleeter ones, with Pollini and Ashkenazy occupying a most distinguished middle ground. For my taste, the rubato which Argerich and Ashkenazy deploy sounds more flowing than Arrau's or Pollini's. Whereas Argerich presented the pieces as brilliant tonal miniatures, banded on the LP in groups of two or three, what impresses in Arrau's recording after several hearings is that he conceives the 24 Preludes as an organic entity, with an unmistakeable dramatic trajectory from the first piece to the last. This is some compensation for his overly sober performances of the famous C sharp minor prelude, which falls flat on its face, the B flat minor, and some of the other earlier ones. While it is exhilarating to hear Argerich's hyperkinetic right hand almost leave both her left hand and keyboard altogether, it is this slight lack of pianistic outrageousness which detracts from Arrau's conception of these works as pure pianism, while retaining its integrity as musicianship. Self-display and a tinge of vulgarity for Arrau are foreign concepts in the interpretation of this Polish master. Argerich is definitely the more memorable, but honours are split for artistic satisfaction.

I was surprised how the PentaTone remastering gave the entire performance a lift. There is a Universal Japan SACD of Arrau's famous Liszt B minor, a 24 bit 96 kHz transfer, but this Chopin remastering is even better. The midbass and lower treble generally sounds rather solid, even congested in many Arrau CD transfers, as though the pianist had surreptitously added another line of counterpoint in this region of the keyboard. The SACD clarifies the presentation wonderfully. Arrau's lowest bass notes now toll like sonorous bells, for instance the beautiful A flat piece, as I imagine they must have sounded in the concert hall. Not only is the part writing clearer, but the general impression is that the performances are quicker, when they obviously aren't.


'Papillons' as an interpretation and recording matches the Chopin. This straightlaced composition isn't a particularly popular Schumann work, although it has its champions, such as Arrau and Richter. Arrau is lavish with repeats, which goes some way to explain the 16 minutes he takes over this small Schumann work. For instance, he observes this at the start of No 2 to incorporate a textual variant only in the repeat.

One of the best of the PentaTone reissue series so far.