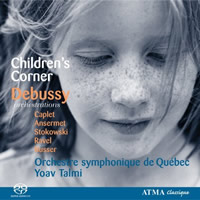 The delightful Children's Corner (André Caplet) is first on this well-filled disc and whilst the opening Doctor Gradus ad Parnassum seems slightly strange to the ear in respect of Caplet's choices the remaining 5 movements are much more in keeping with my notion of how Debussy might have orchestrated these works himself - indeed there are moments where one can imagine some of his own works taking wing. The pacing of these pieces is necessarily slower than some pianists manage to perform the original but it never drags and the extra colour more than makes up for the slightly more relaxed tempi.

Next up is Ernest Ansermet's orchestration of the Six Épigraphes antiques (originally for four hands). As one might expect, this is consummate work from the famous conductor and there are no quibbles or doubts in my mind that Debussy would have been flattered by the treatment of his work. There are wonderfully realised and imagined touches of colour by both Ansermet and the players - especially the evocative playing from the oboist Philippe Magnan.

Clair de lune is then presented in the first of two arrangements - this one by Stokowski and the other is Caplet (which closes the disc). As one might expect, the Stokowski is the lusher of the two and conveys more of a shimmering Romantic dream world than Caplet's. Both are given gorgeous performances, highly sensitive and sensual.

Two complements to Debussy are then given via Ravel's orchestration of Sarabande (from Pour le piano) and Danse (Tarentelle Styrienne) which as might be expected are masterly. The performances nearly match the vivid imaginations of the composer and orchestrator but they are a little too safe albeit beautifully renditions.

Before the second orchestration of Clair de lune, Henri Busser's version of the Petite Suite - which gained the composer's favour - and the preceeding La Soirée dans Grenade (from Estampes) are given just as dedicated performances as the Ravel but with a little joie de vivre.

The sound is wonderfully clear and detailed with a lovely sense of staging but just without that last sense of the walls vanishing.

If you feel buffeted by an uncaring world, place this disc into your SACD machine, put your feet up, relax and listen in a quiet room. You will be transported into a magical sound-world.

There are very few pianists in each generation who are able to make an outstanding success of interpreting the piano music of Debussy, and for that reason we hear it much less often than it deserves. The composers and conductors who painstakingly orchestrated the group of piano pieces arrayed in this collection clearly wanted to have the music heard by a wider public, and at the same time were inspired in their orchestrations by the instrumental sounds which Debussy had composed, overtly or covertly, into his piano pieces. Some of these transcriptions, all lovingly done, are relatively well-known, others, such as the Six Épigraphes Antiques, as rendered by Ernest Ansermet, are rarities. We also have arrangements by Caplet and Bousser, both of whom worked with Debussy's willing consent; Ravel, himself the consumate orchestrator, and Stokowsky, the arch-Wizard of the orchestra.

The Orchestre symphonique de Québec, conducted by Yoav Talmi, number only 60, but the quality of their playing on this disc had me spellbound. From the first liquid runs of the clarinet in the opening Doctor Gradus in Parnassum from Children's Corner to the shy ("gauche") double-bass elephant Jimbo in his Lullaby, the solo work is magnificent, especially from the winds. This is more than aided by the superb recording, warm, wide and airy, which captures every nuance as the flecks of sound and fragments of melody are tossed too and fro, always located precisely in the acoustic space, and exciting their own particular resonances in the hall's space. In my case, pace Polly Nomial, the walls of my listening room vanished, so I'm going for a 5 star recording in multi-channel.

Much of this music is modestly quiet and fantasically detailed, but there are some thrilling fortissimo climaxes, in which the horns and trombones arise majestically and excite even more acoustic resonances. These pieces are all about colour and movement, and I can't think of them being played, or recorded, any better.

Highlights for me - well, the Stokowski transcription of Claire de Lune, in which the opening melody, taken by the flute, immediately made me realise the strong link which this piece has with the opening of Prélude d'un apres-midi d'un faune. Stokowski puts his moonlight into the magical and mysterious world of the sleeping Pan, while Caplet gives us his interpretation at the end of the disc, using the strings for the opening, a more classical and perhaps plainer approach. Fascinating!

This disk will be in my player often. Dip into it or play it in whole, it is a sensuous adventure, and very, very French, as it should be. Perhaps afterwards, you might feel a little like a bon-bon gently dusted with icing sugar. Then head for some Beethoven!

I have always had a soft spot for the music of Claude Debussy. I was particularly excited to see that this disc contained the remarkable "Petite Suite", arranged by Henri Busser. Just listen to the flute in "En Bateau"! I have always loved this work and simply had to have it on SA-CD. I was not disappointed.

This disc is filled with music that will charm the pants off of you. These are sensitive and emotional readings of many of Debussy's works originally written for the piano. These are transcriptions for Orchestra by composers like Andre Caplet, Ernest Ansermet, Leopold Stokowski, Maurice Ravel and Henri Busser.

Yaov Talmi is a sensitive Debussy conductor and the Orchestre symphonique de Québec are a first rate group of musicians in this repertoire. Woodwinds have always played a major part in Debussy's music and this orchestra have a remarkable tonal pallete in their winds section! Just listen to "The Little Shepherd" from "Children's Corner" suite.

This is music made for relaxing or daydreaming. Filled with sensitivity, gentleness, mystery and innocence, this disc will help you truly unwind.

Debussy's music has always been about tone colour and the Orchestre symphonique de Québec bring out the colours in this music. Debussy was labelled an "impressionist" composer. A term he disliked, but it is not hard to see why he was given such a title. This evocative music is filled with colorful imagery.

Provactive, gentle and poweful, this is a disc that all Debussy fans will want to return to again and again. The sound on this disc is warm and pleasing and makes for a very enjoyable time of drifting off to who knows where. All Debussyians will appreciate this magical collection of music. With over 70 minutes of music, this a collection that is hard to resist. I also appreciate the attractive booklet and silk screening on the disc label.

I do hope that we will see more collections of music by Claude Debussy featuring Yoav Talmi and the OSQ on Atma Classique in the future. Very highly recommended.

(This review refers to the Multichannel portion of this disc.)