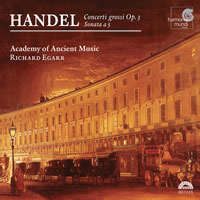 
The six widely diverse Concerti grossi Op.3, published in 1734, and the rarely heard Sonata a 5, a miniature concerto for violin and keyboard, performed by the Academy of Ancient Music and its newly appointed music director Richard Egarr, in their first recording together. Volume I of a projected HANDEL series.

Don't be deceived by the low opus number - this is mature Handel, caught around 1730 in the sudden lack of interest in his famous Italian opera series. Instrumental music was still profitable, so he set about compiling these concerti with material from his Chandos Anthems, his first oratorios and the opera Ottone. Always the great self-borrower, he was able to present these extracts together with new music in an attractive and varied set. The orchestration shows his customary brilliance, with a range of instruments including organ, archlute, guitar, recorders, flutes as well as the normal oboes and strings.

The first concerto has a slow movement which is a tiny masterpiece, rivalling the most intimate of JS Bach's self-communing ariosos; the third is a Corelli-inspired concerto for flute and violin, the fourth launches into the French style, all trills and dotted rhythms, making you think you are in Versailles.

Egarr and the period instrument Academy of Ancient Music (the original of which counted Handel as a member) propel this mostly sunny music with pure joy; the playing is full of character and wit, and the recording richly sonorous and transparent. I could listen to this disc all day and never tire of it; if you are allergic to period strings, have no fear, the AAM are as sweet and sure on their gut strings as could be wanted, and tuning is very good between wind soloists and strings.

This disc is in competition with the set by Combattimento Consort of Amsterdam, directed by Jan Willein de Vriend (Handel: Concerti Grossi Op. 3 - de Vriend). It is also played with great verve and skill, a little faster and with more edge in a similarly excellent DSD recording, perhaps a little closer. The choice is mainly of temperament. You can have the Full English Breakfast with Egarr, or a Continental Breakfast of strong coffee and chocolate croissants with de Vriend. Egarr gives us an extra work, a 5-part Sonata (HWV 288). The choice is yours, neither will disappoint. If you can afford both, then you will realise that you can never have enough Handel. Opus 3 offers humane, civilised and delectable entertainment in both performances, exactly what Handel intended. 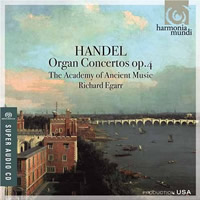 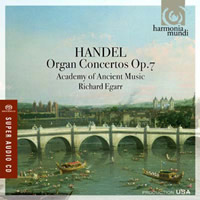