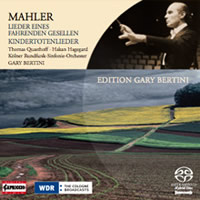 My first encounter with these songs was at live concerts by Janet Baker with Barbirolli and the Hallé, and later I was very impressed by Bertini's performances of Mahler in Edinburgh. Quasthoff seems to have an affinity with the Mahler lieder, often performing them in concert and having recorded them with Boulez and Van Otter. I therefore took a chance in buying this issue of the 'Cologne Broadcast' series, knowing from Polynomial's reviews of others in this series that the recordings were not up to modern SACD standards.

Let's get the recording out of the way first. Capriccio kindly passed on to me the following information: the performances were taped by Westdeutscher Rundfunk Köln on a U-matic with a sampling rate of 16 bit/44.1 kHz. They were later (partly) transferred to CD, from which the remastering to DSD at 5.1 was made. I was interested to see how much the remastering and synthesis of rear and centre channels had affected the sound. Playing the first track (Lieder Eines Fahrenden Gesellen) in MC, the orchestral introductory bars revealed plenty of acoustic space, but Quasthoff's entry rather took me aback, since he seemed to be closely recorded in a large bathroom with metallic walls. Some hasty fader sliding must have been done, because this effect quickly diminished, but throughout the voice still seemed to be in a different acoustic to the orchestra. Moving to the SACD Stereo layer, the disembodied effect was much less noticeable, and in the CD layer, the recording sounded as if it would have been very acceptable as an FM broadcast. Moving back to the MC track, although there was plenty of orchestral detail in these chamber-like scores, the whole 3-D picture never convinced, and there was a tendency for the baritone voice to harden with a metallic edge as its volume increased. Kindertotenlieder and the four extracts from Des Knaben Wunderhorn were recorded about 6 months later in 1993, and are better, in fact quite listenable. But put modern full DSD discs on your turntable, such as Tilson Thomas's Kindertotenlieder with Michelle DeYoung (on the Symphony 3 issue) and Zander with Christopher Maltman for Fahrenden Gesellen, and you are in a different sonic realm altogether!

Bertini has the idiom of these crucial Mahler works under his skin, and responds to every nuance of the stunningly innovative orchestrations. For his part, Quasthoff is superb, if at times a little under pressure at the top of his range. His word painting and tonal variation are wonderful and deeply moving in the Kindertotenlieder, showing how well he has studied the texts and brings them to life. Speaking of texts, Capriccio have committed the cardinal sin of omitting them! Quite staggering. You can find well-formatted pdf files for these works on the web (and incidentally, you can download free scores, too). I used to favour the mezzo voice for Kindertotenlieder (Baker, Ludwig), but Quasthoff has won me over to the baritone (they are all male songs in any case) with his fatherly authority and rich dark tone.

The Swedish baritone Hakan Hagegard tempts us with a selection from Des Knaben Wunderhorn, mainly the militaristic songs, which he presents with great gusto and appreciation of their Mahlerian irony. In Revelge, there is a very satisfying bass drum on the best recording of the set.

I'm mystified as to what Capriccio's marketing strategy would be in releasing these average recordings on SACD when CD would have probably been sonically better, but the more I played this disc the more I enjoyed Quastoff and Bertini's rapport, which has brought renewed enthusiasm for, and understanding of, these songs for me.

If you want these performers, buy this issue. If you want these Mahler lieder, so interwoven with his symphonies, in state of the art modern sound, then wait. We are promised more from Tilson Thomas and Avie.

This disc is one of Capriccio's better offerings in their pseudo-MCH series of Gary Bertini concert performances. Not that the recording is of the highest standard available today but it is far from disturbing ones enjoyment of some rather nice performances.

Bertini was clearly well versed in the language of Mahler's music and trained the Kölner Rundfunk-Sinfonie-Orchester to a high standard. Perhaps they do not have the expressive contrasts that Abbado manages to obtain from his Berlin or Lucerne ensembles but they are more than adequate for this repertoire. The textures are clearly delineated and are combined with a rich variety of tone colours from each and every section of the orchestra.

Of the three groups of songs offered, the excerpts from "Des Knaben Wunderhorn" (Revelge, Der Tambourg'sell, Der Schildwache Nachtlied and Der Antonius von Padua Fischpredigt) are the least successful largely due to the unconvincing Hakan Hagegard - he just doesn't quite inhabit the same world as Bertini and his orchestra. On the other hand, Thomas Quasthoff fully justifies his reputation as one of the most exciting voices of his generation - he not merely sings these songs but makes you believe that he is experiencing the (very different) emotions of "Lieder eines fahrenden Gesellen" and "Kindertotenlieder". He is also, fortunately, of a similar mind to Bertini so that the response to Mahler's conception is a coherent whole.

The recording is fair for the age and prominence but doesn't begin to challenge virtually any modern disc sonically speaking.

Recommended for a lovely example of Quasthoff's art. 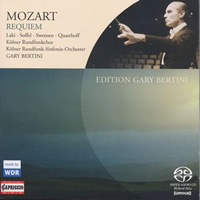 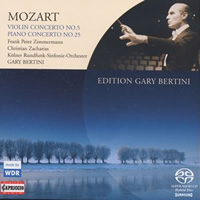 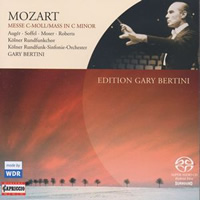 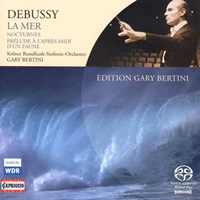 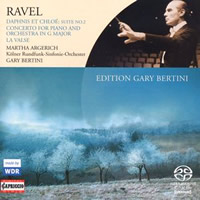 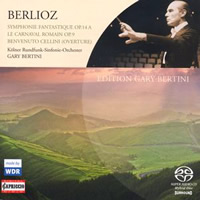 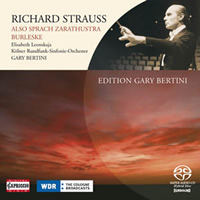