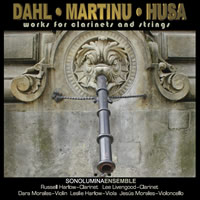 The three works presented here were recorded using the remarkable IsoMike system designed by Ray Kimber. These 4.0 channel recordings are remarkably vivid, but in a totally natural way that enables the listener to follow clearly the instrumental lines in these fairly esoteric offerings while still preserving the illusion of an integrated ensemble in a natural and believable acoustic.

The Concerto a Tre by Ingolf Dahl, written for the clarinettist Benny Goodman, is an amiable piece of neo-classicism in a single movement lasting 18.45, but it falls into a series of contrasting sections which just manages to prevent it out-staying its welcome. The writing clearly owes a debt to Stravinsky, in particular the Soldier’s Tale.

Martinu’s four-movement Serenade from 1951 is typical of his late style. The writing is fluent and energetic yet tinged at times with nostalgia for his Czech homeland. With a recording of this quality one can appreciate Martinu’s ensemble writing to the full. Although it is somewhat invidious to single out one player from the splendid Sonolumina Ensemble, I must mention the viola player Leslie Harlow whose contribution throughout and to the slow movement, in particular, is so memorable.

Karel Husa’s Evocations de Slovaque were also written in 1951 while the composer was living in Paris. The music has echoes of Bartok and Kodaly as well as Husa’s native Czech folk idiom. The three movements are entitled La Montagne, La Nuit and La Danse a vigorous piece that shows off Russell Harlow’s virtuoso clarinet playing to the full.

The accompanying booklet provides, brief background notes on the composers, biographies of the performers and information about how the IsoMike system works.

The recordings are transferred at a very high level, but when one has adjusted the volume settings carefully, the music emerges from an astonishingly silent background, while each instrument has a tonal realism that is almost unparalleled in my experience.

Another triumph for the IsoMike system of Ray Kimber; oh, and the music making isn't half-bad either!

The three works included here are all works of composers that fled the Nazi's in the 1930's to settle (at least temporarily in Martinu's case) in the US. Martinu is the most widely recognised of the trio and the Serenade for two clarinets, violin, viola and cello may be unusual in the combination of the instruments chosen but the musical ideas are not atypical for late Martinu - very enjoyable indeed.

The works of Ingolf Dahl and Karel Husa will be less known to most but they are given very sympathetic and compelling performances by the Sonolumina Ensemble. Dahl's Concerto a Tre (for violin, clarinet and cello) is a one movement, near 20 minute, neo-Classical composition that clearly owes a debt to similar style works of Stravinsky. Whilst not quite the equal of this master, there is no doubting the passionate response of the musicians here and also in Evocations de Slovaquie by Husa. This three movement work for clarinet, viola and cello has a darker timbre (very effective in La Nuit) which again receives the same dedicated and ardent response.

Perhaps though, the most interesting aspect for our site is arguably the most remarkable clarity and faithfulness to instrumental timbre that I have heard yet outside of a concert hall. The 4.0 recording is absolutely merciless in its revelatory detail and the silences really do sound "black"; the hall ambience is also miraculously presented and the walls of my listening environment disappear to be replaced by a very nice acoustic indeed. Fortunately, the playing of the Sonolumina Ensemble is fully deserving of such close scrutiny - I hope to hear more from them before too long.

Very highly recommended for both performance and sonic reasons.