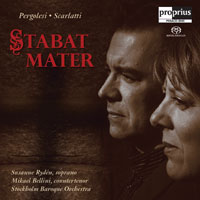 Pergolesi was asked by a Neapolitan secular brotherhood to write them a more modern setting of the medieval Stabat Mater poem, to replace Alessandro Scarlatti's Stabat, which they considered old-fashioned. He allegedly completed it during his last illness before dying of tuberculosis in 1736, aged only 26. There are a host of recordings of Pergolesi's Stabat Mater, fewer of Alessandro Scarlatti's version, and this Proprius release is the first on SACD. I sampled about 30 of the Pergolesi versions for this review, and there is a staggering range of solutions to the performance problems these pieces offer.

First, we have no firm evidence of the number of performers used - but this is typical for most early music; composers used whatever resources were available on each particular occasion, and rarely prescribed an ideal. So in the recorded versions, one finds every combination from a string quartet with continuo (as here), through chamber orchestras of various sizes to the full strings of a symphony orchestra (Abbado, with goodness knows what for continuo), and even an added chorus, thanks to Mozart's pupil Eybler, who added a chorus to what was already a popular and famous piece by his time. These performances might be with period instruments or modern ones. Take your pick!

Secondly, the nature of the soloists, specified as Soprano and Alto in the scores. In the time of Scarlatti and Pergolesi, castrati, countertenors and male altos were available and popular, and boy's voices might also be used, since at that time the age of puberty was much later than it is now, so boy soloists could be quite mature as musicians. There has been a recent trend towards preferring female soloists.

Thirdly, speed. Sampling a series of recordings revealed little or no agreement about the tempi in these works. They range from the positively marmoreal (performance speeds of previous music slowed down considerably during the C19th) to the very brisk indeed. Not all of these tempos work! Scholars are still arguing about this, but the period-aware performances are generally the fastest.

Propius' Recording Producer, Lennart Dehn, has formed a period-aware ensemble for this disc and takes the minimalist approach. Instrumentalists from the Stockholm Baroque Orchestra are used one to a part, with a continuo of double-bass, archlute, chamber organ (Pergolesi) and harpsichord (Scarlatti).

The soprano is Susanne Rydén, a much experienced early music specialist, and she is paired with Mikael Bellini (Swedish, despite his name) who is regarded as the finest countertenor in Scandinavia. Rydén is a consummate artist, she has a steady, flexible and expressive tone with beautiful trills, which seem so natural and never disrupt her line. It is a thrill to hear her voice taking wing into the church acoustic. She reminds me quite a bit of the doyen of early music singers, Emma Kirkby. Mikael Bellini has the most female alto-sounding voice that I have heard amongst male falsettists (I hope he will take that as a compliment), with very little of the 'hooting' quality which can be off-putting. Their voices are very well-matched and together they are responsive to the drama of the Stabat Mater poem, not all of which is directly mournful. Bellini too has fire and spirit in his voice when the composers give him his head. Their interpretation lies deeply in the true Baroque tradition of brightness, high contrast, high emotion and splendid effects; far, far away from some of the overblown romantic singing of wobbly operatic divas in other recordings.

The instrumentalists too are steeped in the period manners, the duetting violins with silvery tone responding to each other and to the singers, while the continuo group keep the quite brisk pace and well-sprung rhythms clear, adding their own textural and tonal touches - a tooting chamber organ chord here, a chord or two on the archlute there, never over-ornamenting their work and attracting attention away from the soloists. Since there is no conductor to impose his or her will, this interpretation has clearly been worked out by all the performers, so they respond instinctively as chamber musicians do, giving a deeply intimate feeling and a sense of freedom to the works.

Pergolesi is "top of the bill" and first on this disc, as he is on most others. Poor Alessandro Scarlatti always gets pushed into second place, not having had the romantic image of the dying composer at the age of 26 in this favour. Market managing is a strange mistress! If anything, the performance of the Scarlatti on this disc is even finer than that of the Pergolesi, and convinces me even more that his is perhaps the finer work. It is structurally a more convincing piece, and the contrasting sections are better organised and less operatic than Pergolesi's Stabat. Try playing the Scarlatti first and Pergolesi after; you will see how he introduced the "New Music" as the Baroque was winding to a close.

Lennart Dehn has taken a minimalist approach to the recording as well. A simple microphone set-up was used, to judge from the session photos in the sleeve notes, to capture the sound of the ensemble in the warmly ample acoustic of a moderately-sized Swedish church. The 5.0 sound is excellent, with the soloists just beyond the altar rail and the listener's seat about half a dozen pews back. Interestingly, the centre channel is used not for the soloists, but for the ambience of the church behind them, and for the continuo. This means that the two front speakers, usually the best in most people's MC setup, carry the voices, which have the singers next to one another in the centre. You can even tell when they move their heads to look and respond to one another, and to project a phrase out into the body of the church. The church's acoustic amplifies the instrumentalists in a way that makes one believe there are many more musicians present.

I could not discover even the tiniest DSD symbol anywhere on the disc or the packaging, so I presume it is a PCM effort, but an excellent one.

The booklet contains a useful essay in Swedish and English putting the works in their context, as well as biographies of the performers. Most importantly, it has the full text of the Stabat Mater in Latin, Swedish and English - and the typeface is large enough to be read by most presbyopic listeners.

To summarise, I think this is a real achievement by all involved, and must rank with the best of the period-aware performances of both Stabats. It has a genuine sense of occasion, rather like a Baroque jam-session. Avoid it if you are wedded to a slow, funereal rendering with massed swooping strings and wobbly operatic stars!