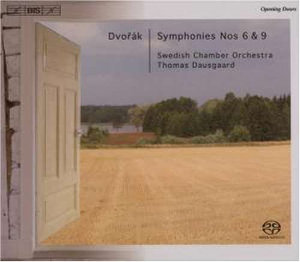 
In 'Opening Doors', their exploration of the limits of what a chamber orchestra is traditionally expected to perform, Thomas Dausgaard and the Swedish Chamber Orchestra have already made a case for playing Schumann with smaller forces than usual (BIS-SACD-1519). The results clearly pleased the reviewer who wrote that the team 'with this wonderful recording catapults into the top of the list of exceptional Schumann interpreters, and also proves itself a very promising proponent of a successful reinterpretation of the Romantic orchestral repertoire' (klassik.com).

Dausgaard's vision was also commended in International Record Review where the performances were deemed to 'have an insight and authority to rank with the finest', while the reviewer in The Sunday Times remarked that 'the playing throughout is first-rate, with often dazzling, thrilling faster movements, but also some beautifully shaped, tender slower music, and a real feeling for the emotional extremes that are at the heart of Schumann’s art.'

The ongoing 'Opening Doors' series will ultimately include a complete Schumann Symphony cycle, but on the present disc Dausgaard and his orchestra have elected to take on one of the absolute mainstays of the Romantic repertoire for symphony orchestra: Dvorak's Symphony No. 9 'From the New World', here coupled with the composer's Sixth Symphony. On the evidence of the previous disc it is fair to expect some cobwebs to be blown away - in the same Hybrid SACD Surround Sound that was so roundly praised last time around.

Dvorak symphonies played by a chamber orchestra? You’ve got to be kidding! Well, that was my initial reaction to this release and as a result I almost didn’t buy it. But, because BIS is my favorite label, I decided I’d give it a try. I’m glad I did.

I love both of these symphonies. In fact I am a fan of all of Dvorak’s symphonies, though I would rank them like this: bottom tier (2 & 3), middle tier (1, 4-6) and top tier (7-9). The thing that surprised me most about this SACD is that the performances do not sound small – they have weight and heft. With fewer strings, the winds and brass (and timpani) are a bit more prominent which makes for interesting listening compared to how we normally hear these pieces. But also striking to me was the fullness of the lower strings. I suppose this could be an artifact of the microphone technique used but in playback the sound has a full and exciting low string sound. Overall, the sound quality is first rate (2 channel) and perfectly supports the performances.

Some specific performance comments. One of the benefits of a smaller orchstra is that at least theoretically one can achieve greater unanimity and ensemble cohesiveness. For example, in Sym 6, the Presto 3rd movement is taken at a harrowing clip. It’s very exciting. Dausgaard displays many fine conducting nuances throughout both symphonies. The Largo of 9 is meltingly beautiful. Many tasteful uses of rubato and dynamics are plentiful. The predominance of the winds and brass bring out those inner voices in a satisfying way. But don’t get me wrong – the string contributions are also excellent.

Would these performances be a first choice in this repertoire? No, but they sure make an excellent supplement to those of conventional orchestras. There are already a number of good 9’s on SACD. Fischer/Philips is quite good as is P. Jarvi’s Telarc disk and Szell’s classic performance on Sony. And don’t forget the plethora of RBCD performances of both 6 and 9 (the Kertesz performances on London comes to mind). All in all, I thoroughly enjoyed this unique recording.

Dausgaard's 'Opening Doors' project, using a chamber orchestra with modern instruments to play music now performed by large contemporary symphony orchestras, has worked quite well with his Schumann discs. These early romantic works were intended for a classical orchestra, and this corresponds quite well with the complement of the Swedish Chamber Orchestra. When I saw that he planned to tackle Dvo&#345;ák, I assumed he would select early, lighter works such as the 3rd and 5th, rather than two of the big-boned last four symphonies. To really hear a significant difference in orchestral sound would properly take a fully period orchestra, such as Gardiner's Orchestre Révolutionnaire et Romantique. They have the requisite gut strings and wide-bore brass which were not superseded in many orchestras until early in the C20th, not to mention appropriate playing styles. Taking on a work such as Dvo&#345;ák's 9th Symphony with a chamber orchestra and hard tympani sticks would in any case require it to co-opt additional brass players; four horns, 2 trombones, a bass trombone and a tuba are required in both the 6th and 9th symphonies. The excellent Swedish Chamber Orchestral numbers 38 players, so the additional heavy brass would certainly have to throttle themselves back so as not to swamp the strings in climaxes. Hardly an advertisement for using a chamber orchestra!

I found it difficult, therefore, to follow Dausgaard's logic that this would somehow reveal more about these two works than all the thousands of recordings using conventional symphony orchestras have managed to do. I made detailed comparisons using Davis' 6th from LSO Live and Fischer's 9th with the Budapest Festival Orchestra. These are not necessarily my ideal choices, but were handy SACDs.

Taking the 6th Symphony, Dausgaard's first movement has a good air of rustic jollity, rhythmically propelled by agile woodwind. Dausgaard follows Dvo&#345;ák's later stipulation not to make the exposition repeat, whereas Davis does make the repeat, accounting for his longer timing for this movement compared to Dausgaard. The LSO are in good form for Davis, and I was struck by the similarity of sound in the two venues; the RCO's Orebro Concert Hall sounded rather drier than usual to me, and comparatively the LSO's notoriously dry Barbican venue actually gave the LSO more space into which their climaxes could expand. In terms of wind/string balance, one of the tenets of using a chamber orchestra, there really was no significant difference, the LSO Live balancing them perfectly against the large string complement. Both Dausgaard and Davis had warm-spirited and supple slow movements, and despite beautiful playing by the RCO strings (divided left and right across the stage), the greater lustre of the LSO strings was apparent. Dausgaard produced a punishingly fast Furiant, pulsating with nervous energy, but Davis' brass outbursts were more impressive. Palms were about equal in the finale, both producing a blazing and exciting coda, but the more resonant acoustic and more prominent bass lines in the LSO live disc was undoubtedly the most thrilling.

Taken in isolation Dausgaard's reading of the 9th is a fine achievement - given the forces concerned. His first movement slow introduction is taken significantly slower than Dvo&#345;ák's suggested metronome mark and lacks forward impetus - Fischer hits the metronome mark exactly and gives a more eloquent lead into the exposition. Both conductors make the essential first movement repeat, and both have first violins left and right, but in climaxes the dryish Orebro hall does not allow the music to bloom, nor does it produce sufficient deep bass to match the sonorous propulsive bass lines of Fischer's orchestra. In the famous slow movement, Dausgaard is again distinctly slower than Dvo&#345;ák's suggested speed. The playing is excellent and beautifully moulded, especially by the solo woodwind, but the gentle flow of Fisher's band, playing at the suggested metronome mark, is to my ears the more deeply moving. It is in the scherzo and finale where the disadvantages of the chamber orchestra are most obvious. The con fuoco opening of the last movement finds the small string group valiantly trying to dig in and produce a big tone, but they are hopelessly outmatched by the Budapest strings in both volume and richness, and later when the firsts are playing triple forte against the combined brass and woodwind, the SCO strings can be heard struggling to produce enough sound without loosing tone. It really is rather too much to ask, and the hall is no help. It seems to me, for works from this period, that matching woodwind, brass and string contrirbutions is a matter for internal balancing by conductor and musicians, and careful microphone placement by engineers, rather than reducing the size of the orchestra.

My personal conclusion is that there really is very little to be gained by playing such late nineteenth century large-scale works with such a small ensemble, and much to be lost. I am in greatly in favour of hearing early music played by true period-aware ensembles, but their advantage is rapidly lessened the closer the music is to our own times. The New World Symphony comes from 1893, but Dausgaard's less than half-way period approach really only proves that it is possible to play it with a smaller orchestra. The Orebro hall works quite well for Vivaldi and Mozart, but it doesn't seem to cope well with larger forces, where its deep bass response is shy. For the full emotional impact and exhilaration of experiencing Dvo&#345;ák's orchestra in full cry, you have to look to modern symphony orchestras. Nevertheless, I did enjoy hearing the mouse roar!

In its favour, this BIS disc is well-played and certainly thought-provoking. The recording is vivid and truthful, if on the dry side and noticeably light in the deep bass. It provides very good value for money, with a running time of 82'27 for both symphonies. But it would not be my first choice for either symphony.