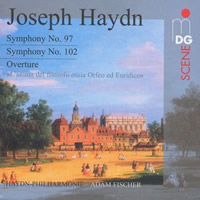 This is the third release on MDG of Haydn symphonies played by the accomplished Haydn-Philharmonie under Adam Fischer. As is the case with the two previous issues, we are also given an overture from one of Haydn’s many operas, here sandwiched between the two main works.

This SACD, in many respects, is even more treasurable than the first two, as it presents a pair of the finest symphonies from the London set that Haydn composed for Salomon in 1791. Although both these symphonies contain melodic and thematic invention of the highest quality, neither carries a nickname, which probably contributes to their unjustified neglect on concert programmes.

Symphony No. 97 in C is one of the grandest in the set and Fischer’s performance certainly emphasises the splendour of the piece. As in the earlier issues Fischer’s tempi are quite relaxed allowing one to appreciate the lilt of the first movement’s second subject but also, aided by incisive brass and timpani played with hard sticks, the swagger of the main allegro. The second movement, marked ‘Adagio ma non troppo’, flows gracefully and Fischer really brings out Haydn’s ‘sul ponticello’ effect on the violins in the last of the variations, achieving a strange, shrill and almost etiolated sound. The Minuet struts its stuff to great effect and the impressive timpani solos really tell in this acoustic while the end of trio, where Haydn required Salomon to play softly and an octave higher than the other violins, is here also perfectly realised. The finale, though dancing along with delicacy at Fischer’s brisk tempo, perhaps lacks a little of the wit and humour evinced by Colin Davis in his performance with the Concertgebouw orchestra (RBCD only).

The choice of the short overture to ‘L’anima del filosofo, ossia Orfeo ed Euridice’ is an apt one, as this was the opera Haydn wrote in London in 1791 but sadly it was never completed nor performed in the composer’s lifetime. The music, typical of Haydn’s mature style, starts with a sombre and martial introduction that immediately gives way to a delightful oboe melody followed a lively allegro. It ends in a splendid blaze of brass.

The opening Largo of the Symphony 102 in B flat, carefully moulded and elegantly phrased by Fischer, certainly marks out the contrast with the Vivace that follows. The Adagio is one of the loveliest that Haydn ever wrote and the legato style that Fischer adopts is natural and full of tenderness, while the contribution of the solo cello is beautifully balanced, never overpowering the tutti violins. Not everyone will like the heaviness and strong accents in the minuet but it does emphasise its rustic character and gives the opportunity for some splendidly raucous brass. The finale, given a sparkling performance, full of brilliance and precision, brings this wonderful symphony to a satisfying end.

The recording, made in the Haydnsaal at Schloss Esterházy, Eisenstadt, is exemplary. It successfully combines richness and warmth yet enables every detail of the music to emerge with outstanding clarity from a sympathetic ambience. The freshness of these performances together with superb SACD multi-channel sound makes this a disc not to be missed, and I hope that we will not have to wait too long for the next issue in this excellent series.

This series just gets better and better!

After a sonically unsure start with Haydn: Symphonies 92 & 94 - Adam Fischer, the problems were rectified in Haydn: Symphonies 88 & 101 - Fischer and this release continues the finer recording technique to even greater heights. Improving upon the last release, in what I hope will be a comprehensive exploration of the mature Haydn symphonies, the recording has managed to impart a lovely bloom to the sound - not quite demonstration quality but very close...

The playing is, as with all releases to date, first class. There is a real spring in the step to all the fast movements and the Menuet(to)'s do really dance under Fischer's baton. The slow movements have plenty of drama - the sul ponticello playing in the slow movement of Symphony 97 is wonderfully evocative and makes the flesh crawl in a similar (but pleasant) way to someone dragging their fingernails down a blackboard...

Compared to the recent Haydn: Sinfonia Concertante, Symphony No. 100 - Nikolic, the playing here is - as a whole - more relaxed, although there are some thrilling moments such as the crescendo at the end of the Overture. All this is aided by the dramatically wide dynamic range that Fischer encourages to the benefit of the music. Some might feel the comic side of the music isn't stressed that much - for me, there is no shortage of wit and whilst a little more could possibly be made of some parts the sheer joy of the playing carried me away.

The only quibble I really have with the disc is the relatively short measure: 51 minutes - a third symphony could easily have been included but I'd far rather this quality than a greater quantity of less enjoyable music making. 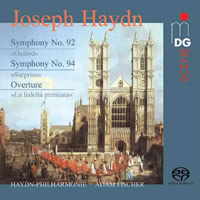 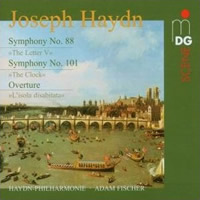 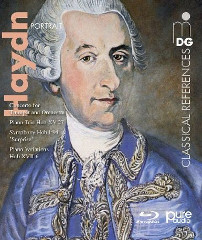