The Rolling Stones: Let It Bleed


This legendary 1969 Rolling Stones masterpiece includes, among others, the classic "Gimme Shelter," "Midnight Rambler" and "You Can't Always Get What You Want." Let It Bleed marked the last time the band recorded with Brian Jones who died five months before its release, to the studio entree point for guitarist Mick Taylor. The album served to transition the band from the basic rock and blues feel for which it had been so well known to a whirlwind of hard rocking frenzy. The featured songs are amongst the band’s all time best: "Gimme Shelter," with its shimmering guitar lines and apocalyptic lyrics, the harmonica-driven "Midnight Rambler,” the druggy party ambience of the title track and the always stunning masterpiece "You Can't Always Get What You Want" which is a triumph of the early period Stones' art: epic structure, philosophical lyric, vibrant horn backing and a swelling choral refrain. Also of note is "You Got the Silver" which marked Keith Richards' first lead vocal and the band's take on Robert Johnson's classic "Love in Vain." Full blown production and down-home acoustic roots all in the same package as only the Stones could offer. Let It Bleed was recorded and mixed at Olympic Sound Studios in London and Sunset Sound Studios in Los Angeles between November 1968 and October 1969. The album was produced by Jimmy Miller and engineered by Glyn Johns. Released in December of 1969, Let It Bleed reached #1 in the UK, knocking The Beatles’ Abbey Road out of the top slot, and #3 on Billboard’s Top Pop Albums chart in the US, where it eventually achieved RIAA multi-platinum status. The album was the Stones' last to be released in an official mono version and was also sourced from the first generation stereo master tape. The album also features a number of notable guest musicians and vocalists, including Ian Stewart, Nicky Hopkins, Jack Nitzsche, Ry Cooder, Leon Russell, Al Kooper, Bobby Keys, Byron Berline, Rocky Dijon, Merry Clayton, Madeline Bell, Doris Troy, Nanette Newman and The London Bach Choir.

The Rolling Stones recorded four studio albums in a space of five prolific years from 1968 to 1972. All are now considered classics - Beggars Banquet (1968); Let It Bleed (1969); Sticky Fingers (1971); Exile On Main St. (1972) - that exemplify the Stones in their prime as recording artists. I consider “Let It Bleed“ as their best release in a storied career as they reached their pinnacle blending hard rock, blues and country that successfully pulls together a well-crafted set of nine songs.

The Rolling Stones often were recorded with murky production. This is not the case with “Let It Bleed” as producer Jimmy Miller keeps it clean while infusing an energy in the music that is inclusive of some dark sonic textures. As recorded under engineer Glyn Johns, the original source tapes were utilized for this ABKCO Records SACD release from 2002. The liner notes for this SACD read like a who’s who of sound reproduction: the original analogue masters tapes with Sound Restoration from Steve Rosenthal; the DSD engineer is Gus Skinas; and the mastering engineer is Bob Ludwig. When you hear the audio it is astonishing….. you swear you are present in the studio with it’s spectacular clarity and detail.

“Gimme Shelter” is an outstanding opening track commencing with the distinctive guitar riff in open-E tuning from Keith Richards. Bill Wyman’s bass kicks in with it's special character of a deep and rich tone as Charlie Watts steady backbeat on drums holds the song in it’s groove. Jagger’s lead vocals are exceptionally clear and noticeably well centred in the mix enabling succinct detail in the lyrics. A mid-song solo starts with some fine harp playing from Jagger as Richards lead guitar takes over with both coming across in excellent bright yet warm tones. The fundamental core, however, is the powerful female vocals from Merry (Mary) Clayton with her haunting background vocals and the emotional intensity of her solo as she steals the spotlight on this song. It is now considered one the greatest rock recordings of all-time and the SACD audio is nothing short of transcendent.

Robert Johnson’s country blues song “Love In Vain” (the lone non-original on the album) is another remarkable moment of excellent recording from the Stones as they add a more traditional country flavour. The first thing to strike you is the creation of a massive soundstage as Keith Richards playing on acoustic and electric guitars (acoustic from left and electric in right channel) frames the soundfield with depth and beautiful ambience. The spatial qualities between Mick Jagger's strong vocals and instruments create a sparse feeling with a slow swing as the mandolin from by Ry Cooder adds a reverberation effect in the background.

“Midnight Rambler” is a great Jagger-Richards composition that stands out with it’s hard rocking style. It is noteworthy for the excellent harmonica playing by Mick Jagger, with it's superb tonality, that acts as the lead instrument for this track. Keith Richards' guitars are heard with exceptional separation from Jagger’s harp work as both musicians move though several tempo changes to drive along the melody. The lead vocals from Jagger are slightly recessed in the mix as a minor drawback to the performance.

Another superlative song is “You Can’t Always Get What You Want” and perfect for the closing track on “Let It Bleed”. The song opens with the London Bach Choir that stirs a far-ranging vocal sound that is uplifting in nature and quite unlike anything The Rolling Stones had ever laid down in a studio recording. Al Kooper plays organ lending an eerie church feeling as a gospel-type backdrop to the music. It works exceedingly well as the soaring sound of the Choir shows off the dynamics on SACD for a beautifully textured and layered effect that can be described as awe inspiring.

This ABKCO SACD release of “Let It Bleed” is hands down a winner of this masterwork. It is pure joy to listen to music on a classic album enhanced by phenomenal audio quality. It most deservedly stands as an excellent audiophile recording in my music library.

As an additional note, ABKCO Records released 22 SACD versions of Rolling Stones albums in 2002 as part of The Remastered Series (in digipak form) and continued production until approximately 2006. Needless to say, several SACD copies of "Let It Bleed” on ABKCO were manufactured and remain available to this day at reasonable prices although you may have to do some diligent searching. Two other high resolution releases of “Let It Bleed” are still in print with Universal Japan’s SHM SACD The Rolling Stones: Let It Bleed and a Blu-ray release of The Rolling Stones: Let it Bleed.

There is also a DSD download available that is excellent. I have the SACD, the blu ray, and the DSD download. I would rank the SACD 1 with the DSD 2 and the blu ray 3rd, though you can't go wrong with any one of the three IMO.

These comments are based on the Japanese pressing of the 2002 Hybrid - I mention this because after looking at the comments on the old site it may be relevant.

I have upgraded my system somewhat since last giving this a spin and have been struck by the dirty production of the album. A bad air day in Beijing you could almost say. I have wondered if bands at the dawn of the 70's had pushed to the limits of the existing tape technology with their music, or was it a particular brand of tape that has imparted many rock albums from this era with a particular sonic signature. One thing is certain, many tapes from this era have not aged well.

As it happens, this suits this (and other) Rolling Stones albums to a tee. I can still remember in my youth marvelling at how good a scratched Rolling Stones record from this era sounded....and I was the type of person who was very pernickety about keeping my vinyl in pristine condition!

It is a wonderful album and has that fairly contemporary dusty, hazy sound. Meaning it could literally have been made yesterday in some hipster basement.

Turn it up and you will not be disappointed.

It would have been nice to mention Mick Taylor on guitar for his excellence rendition on "Love in Vain". 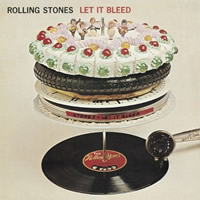