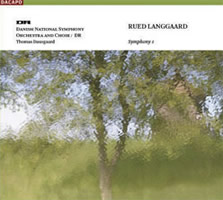 Rued Langgaard: Symphony No. 1 in B minor "Klippepastoraler" ("Mountain Pastorals")


Rued Langgaard completed his first symphony at the age of just 17. No Danish composer had hitherto written such an ambitious, demanding, long symphony, and indeed it was described as unplayable. But in 1913 it was given its first performance with great success by the Berlin Philharmonic under Max Fiedler. Langgaard's models were Tchaikovsky, Wagner and Bruckner, but the work exhibits striking, original features and offers a rich journey from the foot of the mountain where the surf breaks against the rocks until one reaches the magnificent, wide view at the summit.

Rued Langgaard, having criticised his fellow Danish composers for their slavish adherence to modernism, was abandoned to plough his own very Late Romantic furrow. Something of a Wunderkind, he never managed to succeed to the same extent as his near contemporary, Erich Korngold, although ironically there are many passages where his music recalls Korngold. Wagner, Gade, Tchaikovsky, Liszt and Richard Strauss are other very obvious influences in his music. Langgaard believed that music had a meaning beyond mere notes, in a religious sense. He sought to add programmes to much of his music in order to aid the listener's grasp of this meaning, taking Richard Strauss' programmatic works to another level. However, since music is a very imprecise art-form for describing places and events, it is perhaps best to note the composer's inspiration and then let the music take you where it will.

The First Symphony, rarely played and recorded, is an astonishing achievement. Langgaard was 15 years old when he started it, 20 when it was finished after a period of revision. Its 5 movements describe a walk from a rocky shore in Sweden up to a mountain peak, a clear reference to Strauss' Alpine Symphony. Curiously, the work bursts upon the listener with a blaze of majestic sound celebrating the surf, while it ends on a note of contented accomplishment, almost the opposite of Strauss' glorious peroration at reaching his summit. Even at this early stage, the sheer confidence and textural awareness of the young composer as a superb orchestrator is astonishing. Dausgaard simply gives Langgaard his head but manages to control the intense, saturated writing and massive volume of the climaxes which almost roll over one another. With a lesser conductor and orchestra, such rhapsodic and intense music could become overbearing or overwhelming. The indefatigable Danish National Symphony Orchestra are almost pushed to their limits, but respond magnificently, revelling in the torrents of sound they emit but still producing lovely solo work (especially woodwind) at the more reflective moments. There are some flaws in the work, as expected from an inexperienced symphonist. For example, the coda of the first movement seems interminable, despite Dausgaard's well-paced containment of its volume and strength.

The recording is very good, although the orchestra is placed somewhat far back in a reverberant hall. In a way this is a good thing as it allows the huge climaxes to expand nicely, but the acoustic is hard rather than warm, so passages with high strings and added piccolo as in the last movement can sound a little glassy. Chandos managed a warmer acoustic for Segerstam's version of the First Symphony on RBCD. However, played at a good volume, the sound can be quite spectacular, with a very natural concert perspective.

If you like the sound of a large orchestra playing melodious Romantic music with great conviction, this is well worth seeking out. It certainly rewards repeated listening. Langgaard's biographer provides excellent notes on the composer's attitude to the symphony in general and the genesis of the First in some detail.

This is the third release in Dacapo’s valuable survey of the Symphonies of Rued Langgaard and would make a good starting point for anyone wishing to explore the music of this hugely talented, but eccentric outsider. How can one resist a composer who marks the ending of this symphony ‘Entusiastico maestoso’?

It is hard to believe that Langgaard was only fourteen when he began to compose this symphony. His impressive command of a huge post-Wagnerian orchestra suggests a composer of considerable maturity, and one can only speculate how his talent would have developed along different lines had his music been more sympathetically received by his Danish contemporaries. This symphony was however enthusiastically welcomed by the less conservative public in Berlin when it received a performance in 1913 conducted by Max Fiedler.

This SACD is the symphony’s third recording (the second by this orchestra) and certainly in performance terms the most successful. The playing of the Danish National Symphony Orchestra/DR is superb throughout, and Thomas Dausgaard propels the music forward with a sense of purpose that manages to avoid any temptation to wallow in the work’s late-romantic excesses. He also tries hard to clarify the textures of Langgaard’s heavy scoring, but unfortunately is not helped by a slightly generalised and over-reverberant recording that sounds somewhat woolly and congested in the predominantly loud sections of this symphony. The upper strings also suffer from a shrillness that is not to be found on the 1993 Chandos RBCD version conducted by Leif Segerstam and recorded in the same venue.

The surround channels are used purely to provide a welcome ambience.

In spite of the slight reservations expressed above, this is the version of this astonishing symphony to buy, and I eagerly await the announced set of all 16 Langgaard symphonies on this label. 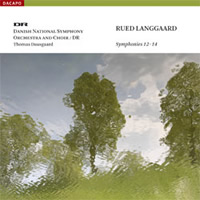 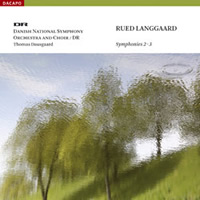 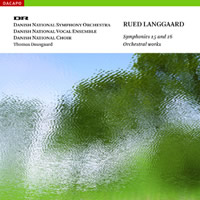 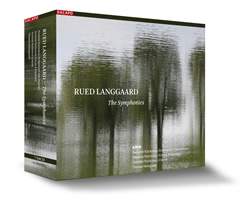