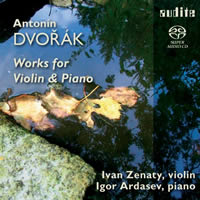 
Most of the familiar works by Antonin Dvořák are vast compositions, monuments of the repertoire of the Romantic Period. Antonin Dvořák, however, was also a master of miniature compositions and also in theses works he still lets his incomparably abundant, original musical fantasy blossom to the fullest. Five of these pieces are presented here.

The Four Romantic Pieces, Op. 75, the Sonatina in G Major, Op. 100, the Sonata in F Major, Op. 57, the Ballad in D Minor, Op. 15/1 and the Mazurek in E Minor, Op. 49 are normally ranked among the amateur repertoire. But the two Czech musicians Ivan Zenaty and Igor Ardasev prove that this classification is unjust: With technical perfection, great expressiveness and high sensitivity for the Czech style they make clear that the so- called amateur pieces are in fact real treasures of the violin repertoire.

Opening with what is probably the most famous music on the disc, Ivan Zenaty and Igor Ardasev give a brooding languor to the first of the Four Romantic Pieces Op.75/1 that many make into simply "easy listening"; that approach merely scratches the surface, which these artists are not content to do. There is no lack of fire for the Allegro maestoso, whose mood is dissipated beautifully to give a winsome, poignant coda. The other movements are also movingly played, particularly the last with the heart-rending "sobbing" melody.

The earlier Sonata Op.57 comes next and is well played although it is not a match for comparable works by the likes of Brahms nor melodically as interesting as the Four Romantic Pieces. Zenaty and Ardasev make the best possible case without entirely convincing the listener to reach for the repeat button. Similar conclusions apply also to the Ballad Op.15/1 and the Mazurek Op.49, well played though they both are, excitingly so in the case of Op.49.

The concluding Sonatina Op.100 (written for Dvorák's offspring when they were 10 and 15) is a delightful work, dating from his New York sojourn. The melodies are strikingly fresh, combined alternately with the "new" harmonies of America and those of his "old world". Zenaty and Ardasev manage to combine the knowing artistry of adults with an appealing freshness, akin to childhood. Life enhancing on every front.

The recording too is the only disappointing factor. The booklet reveals a 44.1kHz/24-bit master and compared to other recordings from Audite (where 88kHz/24-bits masters seem to be more prevalent) the violin sound has a slightly harsh ring to its overtones; a great shame because the recording is otherwise beautifully balanced and gives one the feeling of being "at home" with two musicians making music for their friends.

If you can put up with the less than first-rate sound, then you will be greatly rewarded with some wonderful, home-spun music and music-making. Recommended.

This well-filled SACD (77:48) contains most of Dvorak's charming music for violin and piano. There are a few published pieces for violin and piano missing: The Romance, Op.11 (the original is better known in its transcription for violin and orchestra), The Nocturne, Op.40 (originally for string orchestra), and the Capriccio, Op.24. Also missing (for good reason) is a lost violin sonata in A minor from 1873. Time limitations of a single disc preclude the inclusion of the missing compositions and spilling over onto two discs would have created poor value (unless they were sold for the price of one which would turn that value equation around).

These works do not create a big challenge for musicians. They are amiable, easy-going pieces that even amateur players ought to be able to negotiate successfully. There is nothing here to challange the "statement" sonatas of the usual romantic composing elites but they are quite enjoyable to listen to. The playing of Zenaty and Ardasev is of the highest calibre. They are able to draw as much drama as possible from the notes and manage to keep these pieces from sinking into mundanity (is that a word??). I especially liked Ivan Zenaty's violin tone and playing style which is importnt since the violin is really the star of the show here. That said, Igor Ardasev's piano playing is fully sympathetic and both players share an interpretive vision that is very satisfying. The only quibble I have with their playing is in the Mazurek where they get a tad out of sync briefly. A very minor bobble that should not hinder the overall excellence of these interpretations

The sound is excellent. Recorded in a Berlin church, the hall sound never overwhelms the players but rather complements them perfectly. This is a near-ideal representation of a violin and piano. The violin is full and rosiny though a touch too prominent in the mix relative to the piano. Above the stave, the violin has a realistic bite without in any way sounding harsh or "digital". The piano itself (a Steinway D) is set back a bit in the soundstage but sounds just like a Steinway should with its voluptuous, ringing midrange, a relaxed high end and fullsome bottom octaves. The whole sound picture is wide-ranging with the foundational low-end being nicely captured by the tonmeister. Make sure to set the volume control properly - too loud and the sound loses some of its realism. However, when set right, the sound springs from the speakers in a natural and realstic manner. Recommended for those times when you simply need a relaxing hour plus of beautifully performed and great sounding music.