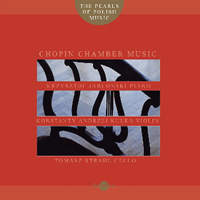 I first heard Chopin's chamber music decades ago, when I was discovering the joys of playing and listening to his piano music. At the time I paid it little attention, but hearing this collection from BeArtTon has been a joyful re-discovery. Groaning somewhat under the weight of Chopin's celebrated work for piano, these works have been swept somewhat to one side, and are more rarely performed and recorded. Putting them in context, Chopin inhabited a world in which domestic entertainment, particularly in middle-class and aristocratic circles, was an important part of social life, and he was expected to compose chamber music. He did so, of course, by choosing the forms in which the piano was prominent, but also featured the cello, for which he had a particular fondness.

The Piano Trio Op. 8 was written when Chopin was 19 and dedicated to Antoni Radziwill, a princely Polish-Lithuanian aristocrat who was a friend and patron of the composer. It is a work written on the cusp of the transition from Classical forms and their expression in the new light of Romanticism. Its first movement begins with a long and strong first subject, the development of which is rather weak, consisting of sparkling piano roulades with the strings repeating (rather too many times) short fragments of the main theme. Marked 'Con fuoco' it is certainly played here with fire by the Chopin Duo and cellist Thomasz Strahl. The following Scherzo is graceful and busy dance-music with folk echoes, while the Adagio sostenuto belies its dramatic explosive opening by immediately relaxing into a stream of soulful romantic melody. The Trio's finale is an extended krakoviak, with more than a hint or two of the F minor piano concerto, with which Chopin was engaged at the time. This is beautifully-crafted music, as might be expected from Chopin, and at least as appealing as some of the young Mendelssohn's chamber works.

The Polonaise in C Op. 3 belongs to a group of pieces for Cello and Piano, which culminate in the G minor Cello Sonata Op. 65 (the last work published in Chopin's lifetime). Together with the Grand Duo on themes from Meyerbeer's Robert le Diable (where the cello part was written by August Franchomme) it is inventive, entertaining and splendidly shows off the virtuosic character of both pianist and cello. Ideal recital pieces!

The G minor 'cello sonata, however, is a product of Chopin's maturity and is a work of very different character. Here, melody and emotion are the keynotes, and all four movements are imbued with Chopin's instrumental distillation of the Bellinian bel canto. The Adagio in particular has a ripe, calm deeply-felt and glorious tune which Elgar might have annotated as 'nobilmente'; it is passed between piano and cello, the latter accompanying in its deepest register. Tomas Strahl here has a wonderful depth of tone, sustained by a minimum of vibrato and eschewing any tendency towards mere sentimentality. A beautiful performance of a work which really should be heard much more often.

Given a fully-detailed and well-balanced high-resolution recording PCM from the airy Lutoslavski Concert Studio of Polish Radio, and the innate understanding of the Polish dance idioms of these fine players, this is a desirable issue indeed. While some great artists have recorded these works in the past, such as Piatigorsky, Yo-Yo Ma, Martha Argerich et al., it would be hard to find more sympathetic accounts than from the Chopin Duo/Strahl collaboration.

Certainly another Pearl in BeArTon's Polish Music series, and a good disc with which to begin exploring away from standard chamber music fare.