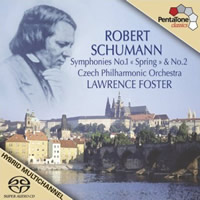 The choice of Lawrence Foster and the Czech Philharmonic Orchestra for a new cycle of these much-recorded symphonies, the remaining two of which will be recorded in April of this year, may seem a strange one as neither conductor nor orchestra has a particular association with this composer’s orchestral works. The results, however, fully justify PentaTone’s decision, as a natural rapport seems to have emerged between the veteran guest conductor and the orchestra yielding two exhilarating and affectionate interpretations. Both are free from unwelcome interpretive gestures that on repeated listening could become irritating, but neither lack character nor at any point sound routine.

It should be stated right at the outset that these are performances in the mainstream tradition making them a refreshing alternative to those recorded by chamber orchestras and period groups. Foster does, however, seat his orchestra with basses rear left and violins to his left and right thus bringing into sharp relief the antiphonal exchanges in, for example, the Finale of the 1st Symphony and the Scherzo of the 2nd. Furthermore, Foster’s tempi for these big band performances are brisk and the results are undeniably exciting. Although these are ‘live’ performances they are mercifully free from audience noise and applause.

The current Czech Philharmonic may not have quite the unmistakably distinctive sound of its illustrious predecessors but the delightfully rustic woodwind sounds fresh and mellow (Symphony No.1 Finale 5.10 to 5.41) whilst the horns still occasionally show their eastern European origins (Symphony No.1 Larghetto 6.01 to 6.07).

The Dvorak Hall of the Rudolfinum, Prague has a long reverberation period that can be problematic. Fortunately this is not the case here, as the Polyhymnia engineers throughout have managed to capture a sound that is warm and smooth, although the emphasis given by the hall’s distinctive signature to the lower frequencies does tend at times towards over-richness and causes timpani to boom rather more than they would in a drier acoustic. The coda of the 2nd Symphony’s scherzo may be felt to have lost a little clarity, but the benefits of the generous acoustic are immediately apparent in the glowing reproduction of the eloquent string playing in the glorious slow movement that follows.

Those seeking new ‘authentic’ insights into these works will have to look elsewhere, but these full-blooded performances with the Czech Philharmonic Orchestra in top form will, I suspect, appeal to many listeners wanting a recording of this coupling and the eventual completion of the cycle should be well worth hearing.
Strongly recommended.

Unlike many that have come before him (and will probably follow), Foster refuses to make points in the name of "significance". Nor does Foster seek out emotional depths that are not to be found; his choice for the violins to be divided left and right of the podium adds a great of clarity to the proceedings (and that is hard won in the Rudolfinum). All of this does the music a great service, allowing it to state the arguments without excessive agitation. In these aims he is greatly aided by the Czech Philharmonic Orchestra who are audibly enjoying themselves - this is not the sound of a composer who needed help in his orchestration.

Particularly enjoyable is the way they move from the rustic approach of the first symphony to the more sophisticated world of the second - the tonal palette of the orchestra changes audibly from one to the next and makes for a very enjoyable experience all round. Indeed my only quibble from an interpreting standpoint comes at the final coda in the second symphony - Foster suddenly and dramatically slows down, arguably a little too much which endangers the flow of momentum. I'd urge listeners to sample this point a few times to check that it's a feature they can live with; I can but I am aware it will not be everyone's ideal solution that Foster has proposed.

Sonically, PentaTone make no attempt to dampen the resonance of the hall but rather live with it as best they can. The audience is wonderfully quiet and there are few occasions when one could actively identify the disc as a concert recording. For all this though, it would not be fair to pretend that this is of the same exalted company of other PentaTone issues. 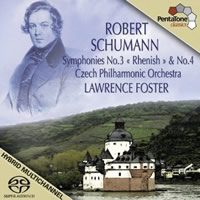