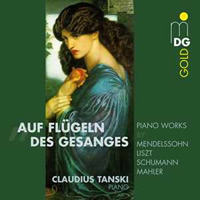 Lovely playing marred by a recording that takes place in a less than ideal acoustic.

Liszt's transcriptions of songs are rightly legendary and (if one will permit alliteration) legion, although the most often heard tend to be from Schubert rather than the two examples of Mendelssohn on display here: "Auf Flügen des Gesanges" and "Die Loreley". In both songs, Liszt's arrangement is very 'straight', putting his consummate skills of the keyboard at the service of Mendelssohn rather than utilising the song as a vehicle for mere virtuoso display and it is in this spirit that Tanski plays; a clean and beautiful rendition of a gorgeous song. The "Variations sérieuses" of Mendelssohn are more volatile in nature and Tanski revels in the contrasts of the work, bringing out the high drama and the lyricism in equal measure - very satisfying playing indeed.

Then comes the mainstay of piano repertoire: Schumann's Fantasie Op.17. There are other accounts of this work on SACD but this musically far outshines those I have heard to date (Schumann, Liszt - Pedro Burmester and Schumann: Piano Works - Nicolas Bringuier). Tanski allies a deep understanding to first class pianism, producing a range of emotions within this work that few match let alone surpass. He successfully captures both the broad sweep of this marvellous work and yet finds time to point details in an entirely natural fashion. Like other artists of stature, he has the insight to outline where he is going from the outset so the closing passages really do feel like a homecoming.

Then comes the discs unique content: a transcription of Mahler's "Lieder eines fahrenden Gesellen" by Tanski himself. Even if the listener has not ventured outside of Mahler's symphonic output, the melodies will be highly familiar, although the timbre of solo piano playing them will not! Good though Tanski is as both transcriber and pianist, there is a limit to the tone colours of a piano that cannot begin to match that of the palette deployed by Mahler in his orchestrations which ultimately becomes frustrating. A very interesting experiment though.

The one factor I find consistently frustrating is the acoustic in which the piano is located. Presumably (the booklet does not say) the photo in the booklet is from the recording venue and alarms were ringing from the moment one glimpsed the amount of polished marble on display. True to expectations, the aural picture is harsh (verging on the strident) together with a very washy sound thanks to the repeated reflections from the walls. A great shame that really detracts from the otherwise fantastic achievement that this disc represents.