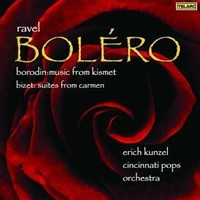 The music in this attractive programme is of course meat and gravy to Erich Kunzel and his Cincinnati Pops. However, this is no routine run-through, but a beautifully prepared concert, performed with an understanding of the context from which the selections are drawn.

The only 'stand alone' piece is Ravel's Bolero. Despite the composer's demure protestations that it was only an exercise in crescendo, it has never lost its popular appeal. The Cincinnati players take their shares in the limelight to characterise and colour their solos most effectively, producing very jazzy swoops and glissandi which add to the sultry and lascivious atmosphere. A delight to hear such fine playing, in a very natural and atmospheric recording which places the orchestral at a realistic concert distance from the listener. The woodwind and brass solos thus have an appealing bloom, and the massive final climax has room to blossom impressively. Thankfully engineer Robert Friedrich has resisted the temptation to manipulate the faders, and we have a coherent sound-stage which is wide and deep.

It was a good idea to present a more rounded set of extracts than usually heard from Wright and Forrest's 'borrowing' of Borodin's music for their musical 'Kismet'. This certainly helped bring Russian chemist/composer Borodin's music to a wider audience. But it also had the side effect of making it difficult to listen to the originals of the Borodin's symphonies and string quartet without Kismet's lyrics entering ones brain unbidden when the great tunes arrive. Kunzel gives us a colourful and affectionate account of the Kismet highlights, with the trademark Telarc bass drum making a spectacular appearance in the Polovtsian Dances. We are left in no doubt of Borodin's wonderful melodic gift and ability to convey dramatic eastern atmospheres.

The two Carmen suites are also impressive, their playing full of Iberian light and colour. Telarc's DSD recording allows us to hear much more orchestral detail than usual in the soft accompaniments to the solo parts, such as support the flute in the Intermezzo and the oboe in the Seguidilla. The Toreador's entry and march have a fine swagger, perhaps just short of that managed by Bernstein in his complete Carmen. The bullfighters are well-served by the bass drum again, and also a large pair of cymbals (thankfully not as large as the clashing gasometers employed by Karajan's BPO in his early DGG recording of the suites). I particularly enjoyed the portrayal of the cheeky gamin singers of the boy's chorus at the Changing of the Guard, and the slow winding up of the final Danse Bohème which brings the Carmen Suites to a glittering and breathless conclusion.

Following the toothsome Bizet, the rarely-heard Arbós transcription from Albéniz' piano work Iberia brings a refreshing touch of acerbity for the programme's conclusion. There is some vivid and dazzling orchestration here too, demonstrating the wide dynamic range of DSD and the natural concert sound which multichannel recordings can bring.

There are very good SACD recording of the Carmen Suites from the RPO and Ermler at bargain price (Bizet: Carmen Suites, Grieg: Peer Gynt Suites - Ermler) and from Telarc's high definition stereo series by Slatkin (Bizet: Carmen, Grieg: Peer Gynt - Slatkin), but these offer different programmes and are outclassed by the sophisticated recording quality of this new disc.

Recommended as a highly entertaining and demonstration-worthy issue, which would make an excellent introduction to classical music for a newcomer.