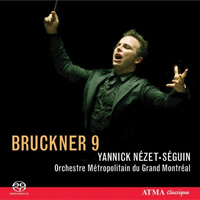 An incredible reading in many ways, few of them good.

The orchestra plays well and clearly follows Nezet-Seguin's directions closely and with the aid of the church acoustic of Saint-Nom-de-Jesus, Montreal produce a flattering body of sound. This picture is revealed to be misleading at points where the score is more demanding and the thinness of the strings (in particular) is marked in comparison to other versions. My principal problem here is the tempo choices of Nezet-Seguin; only the Scherzo is paced in a way that most listeners will find acceptable. The outer movements are slow to the point of being turgid - for example, the Adagio is a full 4'30 slower than Wand's last recording of the work. To do so, Nezet-Seguin exaggerates all possible ritardando's (including many not marked) to reduce everything to a pompous, solemn rite. If somehow, this was bought off with a degree of imagination (beyond the caricature that is attributed to Karajan of purely beautiful sound) then it could just about be recommended but this reading fails to grab the attention and quickly becomes boring.

The acoustic itself, whilst lending a glowing patina and gloss to the orchestra, is problematic in the Scherzo where the vast reverberation time causes the echo's of accented brass notes to collide with the next - and not in perfect time either; the resultant cacophony is not pretty!

For those who want to fall unconscious to this masterpiece, this is probably a less tortuous way of achieving the aim without resorting to sleep deprivation - beyond that, give this as wide a berth as the tempi are slow... 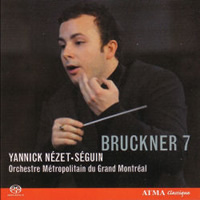