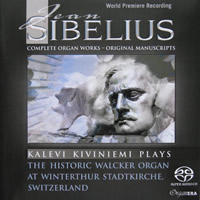 Most of us think of the visionary Sibelius as a composer of symphonies and tone poems. Here we see another side of his art. Most of the pieces on this disc are occasional pieces, in the true sense - music written for specific events. For listeners, it may also come as a surprise to find him as a keyboard composer, but this was normal in an age when playing a piano or harmonium was a commonplace domestic entertainment. Sibelius was a keen keyboard player, and left a significant legacy of piano music (more of which is likely to be discovered). He also had a harmonium in his houses, on which he loved to improvise. Kalevi Kiviniemi in his booklet notes for this disc relates a touching anecdote: when Sibelius was saying farewell to his birth home in Hämeenlinna, he sat at the harmonium and wonderful sounds began to emerge as his fingers caressed the keys. His friends around knew he was "giving a speech" and found themselves in tears.

Kiviniemi is probably Finland's best known organist and has world renown. He is a committed Sibelian, and has collected here what is effectively the complete organ works of the composer, many of them from manuscript sources. They are played on a splendid E. F. Walcker organ of 1887-88, restored in the early 1980's, and in the Winterthur Stadtkirche, Switzerland. This is a three-manual instrument of German style, boasting 16 speaking stops on the Hauptwerke, 14 on the Positiv, 12 on the Schellwerk and 12 on the Pedal organ, which has both 32' and 16' registers. Most of the Sibelius organ/harmonium pieces are of a monumental and heroic nature, and this organ can certainly deliver the goods in this respect. Kiviniemi chooses his registrations with care, bearing in mind Sibelius' own orchestrations, indeed he points out that to play these pieces well one needs to have deep knowledge of the symphonies and tone poems.

The first pièce d'occasion on the disc is an Entrada Op. 111a (MS, 1925), composed for the visit of the Swedish Royal couple to Finland in Helsinki's Nicolas Church. It is thunderous, majestic and awe-inspiring, leaving me to wonder if the the royal visitors greeted at the door by this music might have thought they would have a great deal to live up to! The double pedalling (deep pedal notes held against higher bass rising scales) forms a very impressive foundation.

At last we are given the opportunity to hear the whole collection of music for Masonic Ritual purposes which Sibelius wrote. He was received into the Helsinki Lodge as a Master Mason in 1922. Declining their offer of the resident organist's post for lack of time, he did compose music for them, initially for their harmonium. Some of these short pieces undoubtedly had vocals attached but these are not present in the MSS. Sibelius also sometimes improvised at the harmonium, and had to be persuaded to finish by other members so that ceremonies could continue! A pipe organ was installed at the Mason's Lodge in 1947, and Sibelius revised one of the pieces, the Funeral March, to accommodate this. Both versions of the march are played on this disc.

Perhaps the most interesting and revealing piece is the Mournful Music (Surosoitto) Op 111a (MS) of 1931, the last instrumental piece which Sibelius wrote before his 'long silence'. It was to mark the death of his friend, painter Akseli Gallin-Kallela. Given only a short time to compose it, Sibelius utilised material from the ill-fated 8th Symphony. The presence of this material in the Mournful Music was confirmed by his wife. It is an astonishing piece, full of dissonance and perhaps the elementalism of Tapiola, Spirit of the northern forests. This portrait of a sere and often pitiless landscape gives us a rare glimpse of the direction in which the composer of the 7th Symphony might have gone had his muse not deserted him.

Kalevi uses several of Sibelius' own keyboard transcriptions of his orchestral works, including movements from the King Christian Suite, which takes on marvellous new robes in its organ incarnation, as does the Andante festivo and the Impromptu Op.5 no. 1.

Engineer Mika Koivusalo uses HD PCM to produce an audiophile's organ sound, set back far enough to incorporate the full range of the building's responses, yet still with immediacy and detail. The low bass content is superb, truly room-vibrating when the 32' pedal notes sound, and revealing of the varied and rich timbres in the organ's repertoire of stops. Best heard in 5.0 surround for a fully immersive experience, but the stereo layer is also excellent, if lacking some of the reverberant perspective. This is a well-filled disc, at over 75 mins.

The booklet contains an eloquent essay on the music by Kiviniemi himself (in English, German and Finnish), with specifications of the organ and good colour photos of the organist at the console, and of the organ's handsome mock-rococo casing. There is also a photo of the MS first page of the Intrada Op. 111, showing the double pedalling.

Sibelians and organ-lovers will find this important World Première issue a fascinating and rewarding experience. Highly recommended - a fine production from Fuga. 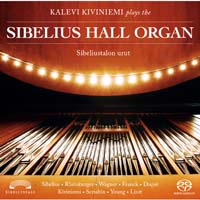