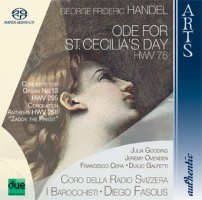 For this splendid disc of Handel, Fasolis has selected three works which are known to have been programmed together by Handel himself when giving concerts in London towards the end of his career.
The major work is the Ode for St Cecilia's Day (she being the Patron Saint of Music), set to a high-flown text by Dryden, who begins with the Creation. God is said to use Music to tune the firmament from chaos by bringing together atoms (with references to the new Newtonian physics). Dryden then proceeds through the characters of various instruments, including trumpet, flute, organ (which St Cecilia herself was supposed to have 'invented'), violin and lyre. Reading this poem, one might consider that it would be impossible to do justice to its exuberant imagery when attempting to set it to music. Handel was undaunted, however, and we find him at his most ingenious and inventive, producing a substantial work for orchestra, organ, chorus and soloists (soprano and tenor) with dramatic recitatives, orchestral interludes, arias and choruses, all prefaced by a noble French Overture.

Fasolis, I Barocchisti (his period instrument orchestra), and the Coro della Radio Svizzera are all based in the Italian canton of Switzerland, while soloists Julia Gooding and Jeremy Ovenden are internationally renowned English Baroque specialists. It is hard to think of singers who could do better in this work. Despite the reverberant hall, it is easy to follow their words. and they adapt their voices to the wide range of expression required, adding their own tasteful ornamentations in best Baroque style. The orchestra are simply superb, with no abrasive period instrument sound to deter, and they clearly relish the music. Fasolis. of course, directs with his customary style and buoyant rhythms. The well-disciplined chorus sound larger than the 28 or so which I counted in the insert photograph, and their English pronunciation and intonation is virtually perfect.

After the final rousing fugal Grand Chorus of The Ode. which portrays the end of the world and its 'de-tuning', Francesco Cera gives a sprightly performance of the Organ Concerto No. 13, popularly known as the 'Cuckoo and the Nightingale'. This crackles with energy and wit, especially in the truly resplendent and joyful last movement which is irresistibly infectious.

The concert ends with one of the best performances I have ever heard of the Coronation Anthem 'Zadok the Priest', which Handel first used for the Coronation of George II (it has appeared at every English Coronation since.) I have longed to hear this piece played faster than the often funereal pace of so many recordings, and here it is at a steady jog-trot at last. The opening section for orchestra is simply a tension-building exercise (with the organ prominent, heard much more here than elsewhere). A number of performances often cheat by building up to the dramatic choral entry with a slow crescendo. However, Baroque orchestras used terraced dynamics and never sustained crescendos, a later invention. Handel achieves his build-up of tension by gradually layering the score with more instruments and textures. The majestic and thrilling entry of the chorus, trumpets and military kettle drums in fusillade, is glorious. Fasolis knocks fully a minute off Robert King's timing for Zadok in his recreation of the coronation music on Hyperion!

The 96K 24bit PCM recording in the Auditorium RSI at Lugano is demonstration-worthy, with all the forces, soloists included, placed in the same warm reverberant space. I could detect no apparent boosting of solos, either instrumental or vocal. As a good recording should, it makes the most of the fine performances and provides a most realistic and involving listening experience, especially in surround.

The only slight niggles I have with this production are a number of typographic errors in the booklet's contents list and English translation - the latter also containing some ungrammatical and downright baffling statements, although the notes are basically well-written and helpful. Some of this, however, should have been shortened to allow the texts to be printed, the lack of which is a great disservice to the listener. We are also told nothing of the organ used.

Enthusiastically recommended as an essential disc of Handel on SACD; music and performances to lend the heart wings.