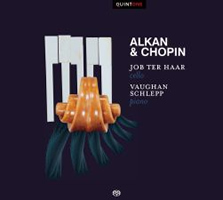 This revelatory disc features performances of two Early Romantic cello sonatas on period instruments, and contemporaneous playing practices are followed. Both players became interested in historical instruments early in their training; Vaughan Schlepp acquired a collection of early pianos including a Broadwood of 1835 and an Erard of 1846, the latter presumably being the instrument used for this recording. The Erard was signed by the legendary virtuoso Sigismund Thalberg on Dec 31st 1846, meaning he must have played it for a New Year concert while it was still new. Job ter Haar is also an experienced early music specialist, and uses here a French copy of a Guarneri, strung with gut, the A and D strings not wound with silver as later practised. His period bow is also French. The duo have been playing together for ten years.

Chopin and Alkan were contemporaries, except that Alkan outlasted Chopin by over 40 years. They were probably introduced by the French cellist Franchomme, and frequently discussed music together, Alkan regarding himself as Chopin's foremost interpreter. Alkan himself was a famous virtuoso pianist, seen as a threat by Franz Liszt. However, his increasingly personal compositional style was not popular with the public, and he withdrew from playing for many years, reappearing in 1857 with new compositions, including the Sonata de Concert Op. 47 for cello and piano, which he premièred with Franchomme.

Alkan's cello sonata poses great technical difficulties for both players, and is full of novel and spectacular textures, which were regarded as eccentric in his day. The melodic interest is shared equally between cellist and pianist, both exploring the full range of their instruments. On this recording, cello and piano blend wonderfully together, with a natural balance, and the wood-framed Erard has different tone colours in its compass, including a remarkably pure and clear treble and a bass rich in overtones. The clarity of the bass range articulation means that Alkan's pedal markings could be used, and his densely-written bass parts are not obscured as with a modern grand piano.

The Alkan Sonata was clearly written, as its title tells us, for a concert, not the salon; it is brilliant and witty, full of surprises. Although it uses conventional structures like sonata and rondo forms, these are expanded in an advanced manner, as is the remarkably chromatic harmony. The bluff joviality of the first movement is played out with great concentration and impetus by the duo, ending with terrific panache. The second movement in 6/8 is a gentle set of variations, offset rhythmically by Alkan's stressing the dotted crotchets in each bar, fooling the ear into believing it is in 2 time. An unusual Adagio follows, launched by the cello clearing its throat several times by playing the open strings from bottom to top. Its main melody lies deep in the cello's range, accompanied by sustained chords also in the piano's lowest reaches. An irrepressible Salterello ends the work, whirling away with joyful abandon in an unstoppable blizzard of notes, increasingly mocked by impish crush notes in all registers. Its dynamic fff conclusion would have brought the house down if played as well as on this recording.

The Chopin Cello Sonata in G minor, which also bears the imprint of Franchomme, is a very different work. One of his last pieces, Chopin put a great deal of effort into it, producing many sketches. Its long first movement has much of the rhapsodic feel of the G minor piano Ballade, and unlike the Alkan sonata, it is deeply introspective, often dark-hued and full of poetic mystery. Job ter Haar and Vaughan Schlepp give it a deeply-felt and superbly poised performance, and here the plangent tone of the vibrato-less gut strings of the cello and the subtle colours of the Erard piano transport the listener to another world. To hear how distant that world is, listen to another excellent performance of the Chopin cello sonata on modern instruments (The Pearls of Polish Music - Chopin Chamber Music), which in comparison almost overpowers the music with richness and power.

The recording, by Arts Music Ltd at Rhoon, Netherlands, supplies a sympathetic but not over-ample acoustic. This gives the piano great clarity and amplifies the sonorous deep regions of the cello, while carrying the duo's wide dynamic range atmospherically. The 5.0 surround layer adds an extra dimension to the players and their ambient environment. One suspects that many of the usual balance problems between piano and cello were mostly resolved by the character of the instruments themselves. Packaging is attractive, in a simple Digipak with a striking contemporary cover design. A detachable booklet, seemingly by Job ter Haar himself, helpfully puts the works in their context.

While the Erard piano is in fine fettle and poses few problems for the modern ear, some listeners might find the gut strings and mostly vibrato-less playing a little difficult to get used to, but the playing is so ardent and infectious that the ear quickly adjusts. Revelatory indeed as an instrumental and musical experience and thus highly recommended.