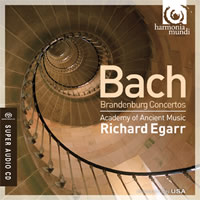 
Long neglected on a library shelf in Brandenburg Castle, these six 'Concertos for several instruments' have since become some of the best-known works in the classical repertoire for their musical inventiveness and their games of mathematical symmetry. Richard Egarr and the Academy of Ancient Music have endeavoured to return to the original 'chamber' conception of the works, with one player per part.

Egarr's new set of Brandenburgs has several unusual features. Together with his highly experienced AAM Period instrument players, a decision was taken to experiment by playing the concertos in pure chamber fashion, i.e. with one instrument per part. Quite possibly Bach might sometimes have played them this way himself, had he lacked greater resources or was performing in an restricted space. Also, the AAM play at a 'French' Baroque pitch of A=392Hz, virtually a whole tone below modern concert pitch (A=440Hz). This was particularly welcomed by the trumpeter, who didn't have to "blast" with his period valveless trumpet in high passages and could phrase more gracefully. The low pitch also allowed the use of French-style woodwind instruments - so we have dove-like flutes but rather fragile-sounding treble recorders. Egarr also adds a theorbo and a Baroque guitar to his own harpsichord continuo. Performing editions for the recording were prepared by the artists from MS sources.

The DSD recording was made in St Jude's-on-the-Hill, London (May-2008 - Mar-2009). For such small forces with horns and trumpet, the captured acoustic is remarkably lively, and I suspect that any Kapellmeister worth his salt would, if presented with this situation, have immediately doubled or tripled his string players. While the brass instruments are well behind the Ripieno (main string group), they do at times cover important lines in the strings, and their strong tone seems out of proportion to the reduced ripieno. Nevertheless, the sound is transparent and well-focussed, allowing more internal detail of Bach's wonderfully experimental scoring to register than usual, and its airy sound matches the interpretation.

Egarr's tempi are on the conservative side, significantly slower than those of Fasolis (Bach: Brandenburg Concertos 1, 2, 3 & 4 - Fasolis, Bach: Brandenburg Concertos Nos. 5 & 6, Triple Concerto - Fasolis), and it seemed to me that the playing was more about loving detail than forward momentum. The effect is one of gentle and polite sophistication with lovely work from the players, but a feeling that they were playing for themselves rather than projecting the 'Affekt' (Baroque term for emotion) to the audience. At times the tempi dragged, particularly in the slow movements, the players sometimes nearly nodding off only to jerk themselves awake, and in long imitative passages the rhythms were somewhat metrical. The usual 'Dancing Bach' was only intermittently present. In the first movement of Brandenburg No. 2 there was some mannered slowing or pausing on upbeats which I found irritating, disrupting the flow. Egarr's playing in the continuo is relatively unobtrusive and stylish, but the small sound of his harpsichord lacks the instrument's usual incisive and brilliant tone, partly as a result of the lower pitch, and it makes disappointingly little impact in the solo passages of the Fifth Concerto.

In general, it seems to me that the outcome of this experiment is that reducing forces and playing in an intimate chamber manner markedly reduces the contrast and colour of the music and therefore the potential excitement and drama of these often robust pieces. Such 'toy' Brandenburgs would be ideal listening in a Princely chamber over supper, but for sparkle, rustic vigour and sheer Period panache I turn, for example, to Fasolis, whose First Concerto joyfully bounds out to greet you. (Fasolis' second disc also includes a substantial Bach filler, lacking in the Harmonia Mundi set).

This interesting Period performance has its own merits and is well worth hearing, but I would suggest listening to some other Period alternatives before adopting it as your only version.