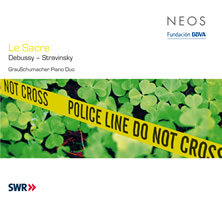 The GrauSchumacher Piano Duo is one of the medium's most important exponents. They are renowned for their intelligent and innovative programme construction, as one can see from this example, which was warmly welcomed a number of times in the concert hall before recording.

One might rightly think that Debussy and Stravinsky had very different temperaments and approaches to composition. Stravinsky was aggressively direct and shocking with his cold logic and rhythmic innovation, while Debussy's music was more intimate, concentrating on harmonic subtlety and creation of mood. They did, however, admire each other's work and in post-1918 Europe they met and even learned from each other. Debussy was in awe of the explosive power of Sacre, and Stravinsky began to recognise Debussy's own modernity. Hearing 'En Blanc et Noir' for the first time (it was completed around 1914-15), he was aware of its significance, rejoicing in the piece's pianistic freedom and virtuosity. He was also flattered that one of its movements was dedicated to his name.

Debussy's haunting suite En blanc et noir (1915) for two pianos was composed in a late spell of creativity, which also included the solo piano Études and the cello and violin sonatas, all concerned with abstract forms. The suite's first movement, "Avec emportement" (With passion) is a waltz that verges on Ravel's sardonic La Valse (1919 ); it is dedicated to A. Kussewitzky. "Lent et sombre" (Slow and sombre) was composed in memory of Debussy's friend Jacques Charlot, killed in World War I; military airs wander vaingloriously through its elegaic textures. The final movement, Scherzando, flits through the impish world of Ravel's Scarbo, both pianists creating wild eddies and implacable marches. In this challenging work, as well as the more relaxed and atmospheric Six épigraphes antiques (1915), the Duo splendidly capture the musing and often mysterious craft of late Debussy, with its oblique references to his early works, modal harmonies and shifting tonalities, jazz, blues and subtle orientalisms. Pan is evoked at dawn with an echo of L'après Midi d'un Faun, and impressionistic morning rain concludes the work.

Stravinsky's Sonata for Two Pianos (1943-44) was composed, he said, “for the love of pure art.” A short work, it represents an unusually relaxed and genial Stravinsky in neo-classical mode. Its pared-down sonata form includes a slow section in variation form, from which several Russian folk songs emerge, one of which is highly infectious. In the Duo's hands, the Sonata glows and smiles - unexpected virtues for Stravinsky!

Some might think that a piano version of Sacre du Printemps is a poor substitute for an orchestral version; this is far from the truth. Stravinsky always composed at the piano and orchestrated later. His thinking was pianistic; the massive chords are the product of his huge hands, the percussive nature of the piano was the perfect foil for his rhythmic experimentation. The Rite was born on the piano, yet Stravinsky spent most of the rest of his life tinkering with his orchestration so that conductors and players could realise it correctly. In 1920 he went to the Pleyel Studios in Paris to carefully make a piano roll of Sacre on the new Pleyella rolls, and this probably represents his intentions more clearly than any of his later gramophone recordings with orchestra (a recording from the roll is available on Zander's RBCD Rite of Spring for Pickwick). In concentrated form, Stravinsky's own two piano score contains the essence of the music, raw and uncluttered with orchestral colours and therefore less prone to a conductor's exaggerations.

This performance of Sacre by the duo, honed in many concerts, is gripping from its sinuous beginning to catastrophic end. All the rhythmic complexities are clearly defined, the Russian nature of the folk melodies is very evident, and the unerring momentum of the piece is thrilling. Stravinsky was always aware of the relative weakness of the last few bars when played with the orchestra, but when one hears the piano versions, the pause before the final screech and slamming final chord make perfect sense. They do not quite make their Dance Sacrale as fast (at 4'22") as the ruthless Stravinsky's 4'07 on his piano roll. Few orchestras ever achieve that insane tempo (Gergiev takes 4'55" - hardly a speed which would do a dancer to death). Stravinsky was well-known for exhorting faster and faster speeds in the Danse Sacrale at the rehearsals for the original performance (to the dancers' and repetiteur's alarm).

This first SACD recording of the two piano version of Sacre is given a superbly natural recording, the two pianos (make not reported) side by side with players facing each other, so that the exchange between players is very clear and adds greatly to the experience. Multichannel adds to the solidity of the image and the presence of the auditorium.

Highly recommended as a fine programme of C20th piano music, most of which is rarely heard (and is fearsomely difficult to play).