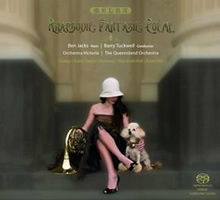 This marvellous collection of unfamiliar, and predominantly French, works for horn and orchestra includes no less than three world premier recordings, each in outstanding performances and pellucid sound.

Jean-Michel Damase, whose ‘Concerto pour cor et orchestre’ (1995) is the first item on the disc, is certainly not a household name. He was born in Bordeaux in 1928, to a family of musicians; his mother, the harpist Micheline Kahn premiered works by Fauré, Ravel and Caplet. He showed precocious musical gifts and at the age of 12 became a pupil of Alfred Cortot, subsequently receiving many prizes for both piano and composition.
His music is completely tonal, winningly melodic and beautifully scored with a transparency worthy of Ravel.
The concerto is in four movements and the music, particularly the Allegro scherzando (2) and the Allegro vivace (4), suggests Poulenc at his wittiest and most urbane. Ben Jacks plays this engaging work with total assurance while the fine Queensland Orchestra under Barry Tuckwell provides an alert and sympathetic accompaniment.

The other work by Damase on this disc, the ‘Rhapsodie pour cor et orchestre’ (1987), also a world premier recording, has an interesting history. It was written in response to a commission from the satirist Barry Humphries, (better known to much of the world as ‘Dame Edna Everage’) specifically for Barry Tuckwell to perform. Humphries also requested that the work should be “inspired by the ocean and the atmosphere of the coast”. The composer has responded with a ravishing composition that captures the mood of a calm sea from dawn to dusk. Though in one continuous movement, the work falls into three distinct sections. An atmospheric and shimmering opening leads to the statement of a captivating melody by the soloist, and is followed by a more rapid central section with a slightly jazzy feel, before the return of the gorgeous opening tune. Damase’s orchestration is delicate with imaginative use of the glockenspiel and xylophone. Barry Tuckwell gave the first performance of the Rhapsodie with the LSO more than 20 years ago and it must have been a heart-warming experience for him to conduct the accompaniment of this lovely work with such a superb hornist as Ben Jacks. On this track the equally fine Orchestra Victoria replaces the Queensland Orchestra.

The third world premier recording on this SACD is an orchestral arrangement of the well known, and fearsomely difficult, ‘Villanelle’ (1906) by Paul Dukas. Though lasting a mere six minutes it tests the technique of horn players to the absolute limit and Ben Jacks’s performance leaves one breathless with admiration. Dukas wrote ‘Villanelle’ for horn with piano accompaniment, but the hypercritical composer destroyed his subsequent orchestration of the piece. Paul Terracini’s imaginative arrangement is faithful to the original.

The ‘Poème pour cor et orchestre’ (1927) by Charles Koechlin is the composer’s own orchestration of his three movement horn sonata. The first movement begins in a mood of pastoral reverie before exploding into a joyous dance. The tranquil andante that follows, allows appreciation of Ben Jacks’s fine legato playing while the finale exploits the more raucous character of the instrument. Once again one’s attention is drawn to the sensitive orchestral playing that Barry Tuckwell obtains from the players of the Queensland Orchestra.

The ‘Morceau de Concert pour cor et orchestre’ (1887) by Saint-Saëns is the earliest composition recorded here. It was written at a time when the valve horn was battling for supremacy over the natural horn and is a fine showpiece, exemplifying the composer’s fluency and complete understanding of the instrument.

The final item makes complete the Australian connection. The ‘Phantasy for horn and orchestra’ (1905) is by GWL Marshall-Hall a London-born composer who settled in Melbourne and, although a controversial figure tainted by scandal, he did much for music education in his adopted country. The ‘Phantasy’ is heavily influenced by the symphonies of Brahms and at its centre has a large cadenza that Ben Jacks dispatches with complete aplomb.

The engineering of this disc is very fine indeed. Phil Rowlands and Richard Girvan have achieved a clean, open sound, flattering to the soloist and the two orchestras involved in the two different recording venues, while the surround channels provide just the right amount of ambient information. The presentation of the disc, in a sleeved digipack is, as usual with Melba, very high-class, and includes detailed notes, in three languages, on the music and profiles of the artists.

This SACD is a most valuable addition to the horn discography and I recommend it unreservedly.