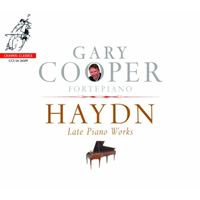 
The inspiration for this recording was derived from that all-too-rare occurrence: a perfect marriage of instrument and composer's music. The language of Haydn's later keyboard writing, containing such infinitesimal subtlety of expression, inflection, dynamic range, colour, and every mood under the sun, from tempest to sunny wit, seems to me perfectly matched by the gem of a piano used for this recording,dating from Vienna c.1785. In truth, I have never encountered an instrument capable of such breadth of touch and response from this period: to my mind, Haydn's last, and greatest, keyboard works, richly deserve being heard on such a piano, in order that the fullest range of expression and depth of imagination contained in these remarkable pieces may be brought alive.

Gary Cooper is one of our foremost performers on the fortepiano, well-known for his wonderful series of Mozart Violin Sonata discs with Rachel Podger. In his booklet for this recording, he tells us that "The inspiration for this recording was derived from that all-too-rare occurrence: a perfect marriage of instrument and composer's music." The piano in question is a Viennese instrument from an unknown maker, dated 1785, from the collection of Edwin Beunk. It is not a copy, as commonly found on recordings, but a lovingly restored original. Cooper might well have added that there is also a clear "marriage" between piano and performer, as these carefully prepared and superbly executed readings of Haydn's late keyboard works demonstrate.

The piano has a gleaming treble range, a warm middle section amenable to cantabile passages, and a richly sonorous and characterful bass which easily resolves Haydn's densely written bass chording. Gary Cooper selected a late C18th tuning with which Haydn would have been very familiar. The resulting temperament produces some shocks to present-day ears; e.g. the amazing plunge from the end of the first movement of Sonata 52 in E flat major to the start of its slow movement in E major. Such a temperament also spices up Haydn's already progressive harmonies in these works. Their character really demands the clarity of crisp attack and rapid decay of a fortepiano, compared to the tone of a modern Steinway, where the tone fully develops only some time after a key is struck, and the decay lasts a relatively long time.

Composing the paired sonatas Nos. 48 and 49 for a German publisher took Haydn's keyboard writing into new territory. It was always based on C.P.E Bach's treatise on ‘The True Art of Playing Keyboard Instruments’ (1753/1762), but these pieces display a new level of fantasy, a greater use of the whole keyboard compass and much experimentation with classical solo sonata form, which had yet to "settle". In addition, the scores are very carefully marked with playing instructions, which makes their interpretation more certain. The sonatas also clearly demonstrate that knowing these late works of Haydn is important for our understanding of Beethoven's often flamboyant keyboard style in his own set of piano sonatas. During the first movement of No.49, for example, Haydn comes up with the same motive as at the opening of Beethoven's much later Fifth Symphony. It is fascinating to see how similar Haydn and Beethoven are in using this motive in their respective development sections. Later in the same sonata, Haydn also produces an uncanny anticipation of Beethoven's Appassionata Sonata.

The set of Variations in F minor Hob.xvii:6 is famous for its coda, added when Haydn heard of Marianne von Genziger's death (she was an amateur player and the dedicatee of Sonatas 48 & 49). Cooper and his magnificent piano give full rein to Haydn's spontaneous and richly passionate outburst, a truly memorable feature of this disc.

Channel's recording, whether in 5.0 surround or stereo, captures all the subtle timbres and voices of the fortepiano with full fidelity, including the damping of the resonances when the pedal comes off, and the wonderful soft veiled tone when the mute pedal is applied. There is otherwise little action noise, and the surrounds add a subtle enveloping bloom to the sound, so that the listening experience is suitably intimate. One is astonished that the recording was made in the full acoustic of Doopsgezinde Kerk, Deventer, Holland. Presentation is well up to the usual Channel standards, in a gate-fold Digipak with the disc in a pleasing uncluttered clean design and a slip-out booklet with musical notes by Garry Cooper himself.

If you have not heard much of Haydn's keyboard music before, this disc would be an ideal way in. Gary Cooper brings out the improvisatory nature of Haydn's writing; unlike so many Viennese piano sonatas of the time, Haydn is always unpredictable, impish, whimsical, mixing soulful songs and earthy good humour, passion with sparkling roulades of ornamentation and sheer joy. Thankfully Cooper gives us all the repeats and is a perfect guide to the language of the piano in the late 1700's. Recommended without reservations!