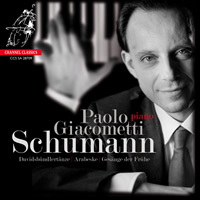 
By late summer of 1837, the 27-year-old Schumann was secretly engaged to his beloved Clara Wieck. The powerful emotions connected with this event were a stimulus to Schumann's creative impulses, for he was a Romantic through and through. It was at this time that he composed the deeply personal Davidsbundlertanze -18 dances inspired by the imaginary league of David. This fellowship, invented by Schumann, consisted of Schumann's own alter egos, plus a number of well-respected musicians and friends including Felix Mendelssohn-Bartholdy. The group was established as a way of fighting against the Philistines; it was Schumann's response to contemporary musical trends which he saw as cheap, excessively virtuosic, and superficial.

Two of the Davidsbundler, Schumann's alter egos Florestan and Eusebius, occupy a central place in all of the composer's works. Florestan, is extroverted, lively, and wild; Eusebius is intimate, gentle, and shy. The tensions between these two extremes also provides a narrative thread for the Davidsbundlertanze. Schumann placed the signature of one character or the other at the end of each of the eighteen dances; some are even signed by both characters. At the end of the cycle, the second dance, one of Eusebius's melodies, returns, only to be cruelly interrupted by Florestan. But Eusebius, nevertheless, has the last word. Over the last dance, Schumann wrote Ganz zum berflu meinte Eusebius noch folgendes; dabei sprach aber viel Seligkeit au seinen Augen. [Eusebius expressed the following opinion, quite unnecessarily; but at the time, great happiness spoke from his eyes. In 1838, a year after the Davidsbundlertanze, Schumann composed the Arabeske. Peaceful, equable and timeless are words befitting this little composition, meant to be a delicate ornament. The Arabesque, as a musical form, was later used by other composers, such as Debussy and Reger, in an expression of admiration for Schumann.