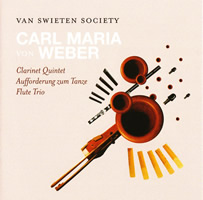 A period instrument group with a variable membership, the Van Swieten Society hail from The Netherlands, that hotbed of period research, teaching and performance. They take their name and inspiration from Baron Gottfried van Swieten, a Dutch musicologist who, as Director of the Vienna Court Library, had a significant influence on the careers of Haydn, Mozart and Beethoven.

Carl Maria von Weber(1786-1826) was one of the most significant figures in the German early Romantic movement, famous for his operas and symphonies. His chamber music is less well-known, but the three fine examples of this genre recorded here illustrate his genius for instrumental writing, melodic gift and flair for showmanship and entertainment.

Weber had a great affection for the clarinet, producing a pair of very fine concertos for the instrument. The Clarinet Quintet in B flat major Op.34, J.182 dates from 1815, a turbulent year in war-torn Europe as marked by the Napoleon's defeat at Waterloo, yet the music bears no signs of conflict. A string quartet of Franc Polman (violin), Igor Rudhaze (violin), Bernadette Verhagen (viola) and Job ter Haar (cello) are joined by Frank van den Brink on a period clarinet (of unspecified make). All of the artists have great experience from membership of various ensembles and orchestras; Brink is the principal clarinettist in Jos van Immerseel's l'Orchestra d'Anima Eterna. The gut strings produce a light and open texture which is ideal for Weber's music, and Brink's mellifluous tone is liquid and limpid, with impeccable roulades and expressive phrasing. The first notes of a piece immediately tell much about the performance, and here the suspenseful opening on quiet strings builds to a bouncy and nonchalant opening tune from the clarinet which speaks of the wit and grace the players invest in this Quintet. They splendidly capture the friendly dialogue between their parts in the mainly cheerful progress of this out-going work, and Brink's spectacular leaps, flawless passage work and sympathetic rubato produces some of the finest clarinet playing I have heard in a long time.

Weber's "Invitation to the Dance" is one of his best-known pieces, albeit primarily from Berlioz's colourful orchestration. Fran van Oort gives us the opportunity to hear it in its original version for piano solo, and on an (again unspecified) fortepiano. Weber left a detailed programme for this work, which involves a gentleman in a ballroom making advances towards a lady in the Prelude; she finally accepts and they go whirling through a series of waltzes. Their touching "good night" uses a variation of the opening coy invitation and brings the often virtuosic piece to an end. The well-written booklet provides this programme in all its details, as well as much more informative material on Weber and the chamber music. Van Oort's unfussy performance reveals a greater intimacy and style than that heard from playing on modern concert grands, and is most affecting.

Weber's Flute Trio in G minor, Op. 63, J.259, of 1819 is a gem of early Romanticism, and a most unusual piece of chamber music. It was written at the same time as the singspiel 'Der Freischütz, and shares some of that work's thematic material. Exceptionally, the third (Andante) movement is prefaced by a Goethe poem "Schafers Klagelied" (Shepherd's Lament). The poem was based on a folk tune to which Goethe wrote new words. Weber follows the drama in great detail, with Marion Moonen's sweet and gentle period flute bringing the cello and fortepiano narration to a dramatic conclusion. Again the notes are a mine of detailed information about this inspired and unorthodox movement. The trio is a delight from beginning to end.

Peter Arts' minimalist recording in the smallish Mennonite Church in Deventer, Netherlands gains much from the acoustic halo of its environment. The microphones are at a respectful distance from the instruments, allowing them to fully develop their tone, with only a few audible soft breaths from the wind players, and almost no key clatter from the clarinet. There is a certain amount of keyboard noise from the fortepiano, but it is not obtrusive and adds to the wide range of tone colour which the instrument portrays. In both stereo and multichannel (with ambient support from the surrounds), the effect of listening to a live recital is both pleasing and convincing.

A well-planned and rewarding chamber recital, which ideally reflects the essence of early Romanticism, delivered with consummate artistry. Highly recommended. 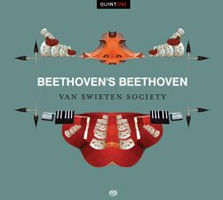