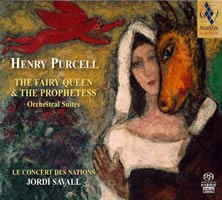 
A vivid and vigorous performance by Jordi Savall, critically acclaimed for his exploration of the ancient and baroque English repertoire, Two orchestral masterpieces, varied and full of fancy, by Henry Purcell in a luxury digipack.

AliaVox are systematically remastering their Astreé RBCD catalogue and re-issuing it as the "Heritage Collection". This Purcell disc's first incarnation was in 1996, and it now appears as a Hybrid with SACD Stereo and Multichannel - the latter presumably with synthetically generated centre and surround channels for ambience.

Purcell seems not to be getting as much attention in his 350th birth anniversary this year compared with Mendelssohn and Handel (not to mention many other notable composers), so this reissue is certainly timely. It was celebrated for both performance and engineering, not surprisingly, because Le Concert des Nations play their period instruments with great skill and understanding of the period. Jordi Savall, of course, is saturated in the music of this kind and his intensive scholarly research is always applied with acute musicality.

London audiences in the period following the Restoration of the English Monarchy in 1660 did not for some time succumb to Italian opera, which was sweeping across Europe and had even been adopted by the French. Instead, they preferred plays interspersed with considerable amounts of incidental music, known as 'semi-opera', and Purcell was at the forefront of this development. He introduced more dance music to the form, and placed a much greater emphasis on lavish orchestration, augmenting the customary string group with woodwind, brass and percussion (even using a rare tenor oboe in The Prophetess). His aim was to entertain a sensation-hungry audience, enhancing the dramatic antics of Gods, Spirits of various kinds and foreign Exotica in which the existing plays abounded. For this endeavour, his compositional gifts of flights of fancy, deftness of touch and prolific invention were highly successful.

While the Suites presented here are a succession of mostly short pieces (many only just over a minute long), they form a delightful entertainment. Listen to the 'Dance of the Furies' in The Prophetess (1690), with the rapid tossing of sizzling scales between the treble and bass strings, the lightness of its 'Bird's Prelude' with a pair of wooden flutes cooing seductively at each other, and the airy pointed rhythms of the First Act's Jig.

The more substantial 'Fairy Queen' (1692) offered Purcell even more scope for his imagination and great melodic gift. Its Act 3 air "Love's a Sweet Passion" is an unforgettable tear-laden violin solo with delicate support from hushed strings and theorbo; there is a gravely ceremonial French-style 'Symphony while the Swans come forward', and he even takes the musical impossibility of 'A Monkey's Dance' in his stride with a very lively terpsichorian episode. Despite the fact that few in the audience would have any concept of what the 'Dance of Chinese Men and Women' might entail, he adapts one of his favourite forms, the chaconne, into an impressive jerky fan-flashing ballet.

The beautifully-balanced and natural-sounding recording is somewhat more refined in string tone and instrumental colour than the Astreé issue, but not greatly so. If you already have the RBCD you might not need to relinquish it. Focus and detail are not quite up to the best of modern recordings, but the tastefully added ambience from the rears is subtly effective, adding bloom and enhancing perspective.

AliaVox's presentation, in a 3-fold Digipak with colourful art by Chagall, is exemplary as usual, with multi-language notes and monochrome illustrations of fairies from the works of Arthur Rackham around the turn of the C19th.

Recommendable for its portrayal of the grace, elegance and sheer fantasy of the Purcellian semi-opera experience. 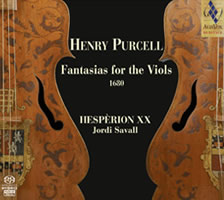