Mark, thank you very much for providing us an insight in to HR Audio's review policy. I will certainly enjoy adding comments if a download release of the same music is worthy ... 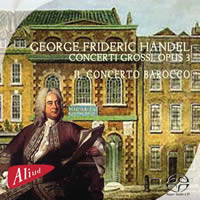 
George Frideric Handel (1685-1759) was a practical composer. He believed in recycling: if he once wrote a rather good piece, he used it again elsewhere. Of the compositions entitled Concerti Grossi, Opus 3 (1734), only the first was originally conceived as a concerto grosso. The other five are compilations of movements written years before, with a few new movements added. Opus 3, therefore, could be described as an environmentally friendly compilation of 60% recycled and 40% new material. The publication contains a wonderful variety of texture and colour, and is full of contrasting emotions. The individual concertos feature different instrumentations – pairs of oboes, recorders, cellos, violins and bassoons all make an appearance, as well as solo violin, oboe, flute and organ.

This is currently the third recording of Handel's delectable Concerti Grossi Op. 3 to appear on SA-CD. I'm astonished not to have heard Il Concerto Barocco before. They are an international group of period instrument players who trained in The Netherlands and now meet as a group to renew friendships by playing music together. Unusually, they play without conductor. Musical democracy is a great success in this case. As one immediately realises when the first few bars of Concerto No. 1 bounce jubilantly out of the speakers towards you, their precision of ensemble is impeccable, supple melodic lines are phrased with grace and character, and there seems to be a real chemistry between the players, so that the fluency and wit of their interchanges brings a smile to the listener. Tempi, internal balance, structure and dynamics are clearly worked out carefully in rehearsal, while the performances are spirited and spontaneous-sounding with infectious rhythms.

As the disc's notes remind us, this set of concertos had only about 40% new music, so some 60% of the material is recycled from other sources, mostly Handel's own works (although he was not averse to lifting a good tune from other composers if it would suit him). They are full of instrumental colour, being for strings with oboes, flutes, recorders and bassoons in pairs or solo - and chamber organ in no. 6. Concerto Barocco make the most of Handel's colouristic orchestrations, aided by the wide-stage recording which portrays spatial thematic statement/answer and echo effects vividly. As well as the vigorous and celebratory dance-forms, double-dotted French overtures and quixotic jig finales, there are slow movements either gentle and pastoral or full of operatic drama. Concerto Barocco extract the maximum of Baroque 'affect' from each movement, playing in a very natural unmannered, unfussy way (no fashionable 'squeezing' of tone or dynamic bulges in melodic lines). The band rests on the powerhouse of a solid, deep and propulsive bass continuo, while the harpsichord is clearly present but never pushes itself forward with fiddly ornamentations.

Jos Borland's DSD recording in the Late Baroque Old Catholic Church, Delft has a pleasing ambience which enhances the chamber orchestra's sound. There is a wide sound stage and precision placing of each instrument. Wooden flutes and hooting recorders sound marvellous, as do the sonorous cellos and throaty violas either in pairs or as solos. This immediate and realistic balance communicates very well the band's brilliance of attack and also its soft expressiveness in slow movements.

I have all three of the current recordings of Op. 3, and comparing the Academy of Ancient Music/Egarr with Combattimento Consort Amsterdam/de Vriend (Handel: Concerti Grossi Op. 3 - de Vriend) in my review of Egarr's fine set (Handel: Concerti Grossi Op. 3 - Egarr), I said "The choice is mainly of temperament. You can have the Full English Breakfast with Egarr, or a Continental Breakfast of strong coffee and chocolate croissants with de Vriend".

Egarr gives us an extra work, a 5-part Sonata (HWV 288). He also uses his own performing edition of Handel's Opus 3, based on the score originally published by John Walsh in 1734 and authorized by the composer. Additionally, He makes some instrumental changes of his own (flute instead of oboe as the solo instrument in Concerto 3 and in the sixth concerto Egarr performs his own improvised middle movement for organ. No mention is made of score issues in the other recordings, so presumably they use the un-revised Walsh - not that such academic details have much impact on most music-lovers.

In terms of overall temperament, Il Concerto Barocco's readings lie somewhere between Egarr's silky sophistication and Combattimento's sometimes brusque directness and vigour. No matter, Handel is the winner; all three versions will give great pleasure. Which one would I listen to most often? Il Concerto Barocco's, because they have that special spark which for me most effectively conveys Handel's sheer happiness in his Art. I had a smile on my face while auditioning the Handel, and I want to hear more of this band.