I DARE SAY... That this GOS EMI-TOSHIBA Holländer is the best digitally remastered CD EVER... 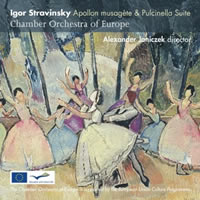 
Regarded as 'The best chamber orchestra in the world' (The Daily Telegraph) the Chamber Orchestra of Europe perform Stravinsky's Apollon Musagète conceived as a ballet blanc and The Pulcinella Suite, a ballet based on some of Pergolesi's music.

The performance of Apollon musagete is quite wonderfully dispatched with the director Alexander Janiczek taking centre stage with the solo violin work. Compared to Stravinsky: Le Sacre du printemps - van Zweden, this is a smaller scaled reading in terms of the size of ensemble but easily surpasses the reading in terms of imagination and sheer commitment that the Chamber Orchestra of Europe bring to the score. These virtuoso players seem alive to every nuance that Stravinsky places in front of them and the COE responds with relish; indeed the quality of the playing lingers long in the mind of the listener.

The Pulcinella Suite, heard here in the revised version from 1949 instead of the more usual 1922 edition, is given a tremendously spirited reading - it is impossible not to be caught up in the sheer zest that the COE approaches the faster movements. Nor do Janiczek or the COE ride over the many felicities that lie in movements such as the Serenata - at all times one is left in no doubt that this is one of the finest ensembles to have been captured on SACD. As Stravinsky's re-working of Pergolesi concludes, it is very hard to stop oneself reaching for the remote to set the train of events in progress once again.

The sound, captured in the Eglise Maronite Notre-Dame Du Liban (Paris), is very fine indeed; every detail of the scores and the inflections that the COE bring to the music are relayed with dramatic bite and fortunately without a high degree of resonance.