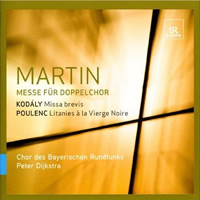 Few people know much about Swiss composer Frank Martin (1890-1974), despite a slow but steady rise in the number of recordings featuring his music. He was a Calvinist pastor's son who studied mathematics and physics at Geneva, while also studying piano and composing, having written his first music at the age of 8. As a profoundly devout man himself, he set extremely high personal standards, being particularly fastidious in his largely self-taught compositional skills.

The Mass of 1926 for unaccompanied double choir, which is one of the greatest a cappella works written in the C20th, lay untouched in a drawer for almost 40 years until Martin was finally persuaded to allow its preformance in 1963. The reason lay in his conviction that making public such a personal artistic view of the essence of Christianity was tantamount to blasphemy.

My present touchstone for Martin's Mass is the brilliant performance by the Westminster Cathedral Choir under James O'Donnell (RBCD). Dijkstra takes a generally more leisurely view than the Westminster one, his 'Gloria' and 'Agnus dei' are fully a minute faster than Dijkstra's timings, although the timings of other movements are quite comparable. The Westminster boy trebles, with their edgy open sound, cut through the complex textures with dramatic effect, and O'Donnell ensures that that Martin's piquantly dissonant harmonies are given full rein. Dijkstra's mixed choir, however, provides a softer, more luminous and well-blended sound with muted colours, like the interplay of pools of light from stained glass. The work thus sounds less modern, but still carries conviction and, dare I say it about a Calvinist's work, sensuousness. I was particularly taken with the Gloria, where the 'tu solus' section positively dances with delicate madrigalian sounds. Elsewhere, the choirs are alert to the drama of the Mass, particularly in their urgent, nightmarish Benedictus, the opposite of the usual sweetly lyrical Catholic setting. All in all a satisfying interpretation, although perhaps having somewhat drawn Martin's sting, giving the work an unusually perfumed air.

Kodaly's more conventional and more or less tonal Missa Brevis of 1944 was written in the stark shadow of a World War. Although springing from the usual non-Calvinist roots of Palestrina, Plainchant and Bach, it differs markedly from the Protestant Martin Mass in being open-heartedly folk-based and unashamedly rough-hewn. Dijkstra gives it plenty of light and shade, and the chorus respond with enthusiasm, summoning a variety of vocal colours. Rooted more or less in tonality, the Missa Brevis nevertheless has much fertile invention and depth of feeling. The 'Agnus dei' is particularly charged, having been written while Kodaly was sheltering in a cellar. It is a profoundly urgent plea to the Lamb of God for peace in the world. The soloists, particularly in the Agnus, are excellent, a plangent tenor singing over the deep basses, and later a stratospheric soprano soaring above the female choristers. Marc Hanft provides excellent sonorous organ support, with well-chosen registrations.

Francis Jean Marcel Poulenc lived a life in Paris as something of a dandy and dilettante (he was a member of Les Six), until in 1935 he attended a pilgrimage at Rocarnadour in France, the location of a famous Black Virgin statue. He became converted, and spent much of the rest of his life writing sacred music. The Litanies à la Vierge Noir were prompted by the death in 1936 of one of his dearest friends, a settings of poems about the miraculous translation of the Virgin Mary's house to Loreto in Italy. Here we have the first version, for three-part women's chorus and organ (the work was orchestrated in 1947). This is an atmospheric performance, using distance in the resonant acoustic to point up the antiphonal setting. The organ makes often angry, dissonant interventions into the humble melismas of the pleading choirs.

Sonically, the engineers in the two resonant locations used have opted for a somewhat distanced view of the choir. The 5.1 sound certainly captures the ambience very well, but for more detail in the quieter singing, and to widen the sound stage, it is necessary to play the SACD at a fairly high volume, although this tends to make the sound of the high sopranos at big climaxes not quite clean. The organ is well-recorded, with plenty of deep pedal sound.

A very listenable and often illuminating programme of significant C19th choral works, which need not put off any listeners who are wary of somewhat dissonant music. No supplied texts at all though, especially needed for the Poulenc.