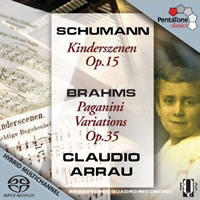 Arrau's playing of Kinderszenen is superb and captures both the innocence of childhood whilst reflecting the knowing wisdom that being an adult brings. His tone is both warm and rich, though never cloying in such delights as Traumerei, which brings a consistent delight to the ears. This approach is also maintained and justified in the faster (but not tricky) movements. The title of the concluding number of the set "Der Dichter spricht/The poet speaks" basically sums up the performance from Arrau.

His performance of Brahms Paganini variations however is less recommendable as a whole. As noted in Liszt: 12 études d'exécution transcendante - Arrau and Chopin: Preludes - Arrau, Arrau perhaps shies away from open virtuosity, which arguably several variations and the finales of each book call for. In the slower, more poetic variations, Arrau plays with a sense of line and vision that is rarely heard. Sadly, in the more extrovert variations, Arrau must yield to Brahms: Variations for piano solo - Schmitt-Leonardy - although Schmitt-Leonardy has his faults, he at least can render the trickiest passages in tempo and evenly. Ultimately neither performance is entirely satisfactory; Schmitt-Leonardy is less well contrasted than Arrau but he produces a better reproduction of the printed score but in sound that is far less beautifully balanced than Arrau's.

The sound, recorded in the Concertgebouw in 1974, is firm and rich with a balance that is just right - listening closely, one can occasionally hear the workings of the pedal mechanism but it is far from distracting and one is caught up with the music making.

Altogether, a curate's egg and with a playing time of under 46 minutes, many may regard this as poor value. I wouldn't want to be without this Kinderszenen though!