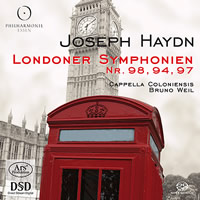 With Haydn's lifelong experience in entertaining easily-bored aristocrats as well as musically nourishing his connoisseur followers, we must envy the audience at Salomon's London concerts hearing these surprising symphonies for the first time.

Symphony 98 in B flat major was written on Haydn's first London visit in 1791, where he was devastated to get news of his dearest friend Mozart's death. Premièred on his 1792 visit, it is Haydn's public farewell, and the vehement pronouncements of the strings in its slow introduction leave no doubt as to Haydn's feelings. Cognoscenti would also have recognised references to Mozart's piano concerto KV 491. The development section of this first movement is serious and fugal, recalling Mozart's discovery of Bach's music, this changing the direction of his musical development.

The second movement of Symphony 98 reflects Haydn's chagrin at being tied down in London and unable to race back to Vienna; its main theme is a grave quotation of 'God Save the King', pavane-like, deeply emotional and full of outbursts, searching through many keys for a final resolution. The Minuet pays homage to Mozart's 'Haydn Quartets', with their particular development of sonata form, and its trio recalls the quartets' robust and carefree Minuets. A remarkable Finale eschews Haydn's usual high-spirits for what Mathieu Kuttler in the disc's booklet aptly calls "a senseless dash through life" and "wandering helplessly through the keys", both expressions of Haydn's grief. In a touching Coda, Haydn unexpectedly introduces an unannounced fortepiano solo, its naive and archaic style surely a reminder of Mozart's childhood stay with JC Bach in London. This solo is often sadly omitted from 'Big Band' performances of the work.

Surprises certainly abound in Symphony 94, its English nickname of 'Surprise' symphony coming from the audience's astonishment on hearing its opening. For the first time in the history of the symphony, woodwind alone start proceedings, later answered by the strings, causing the audience to draw breath. Germans, on the other hand, dubbed it 'Mit dem Paukenschlag' for the startling drum beats in its Minuet. "Encores from every throat" was the entry in Haydn's diary for its appearance in one of Salomon's 1791 concerts. Weil and his band make the most of these surprises yet do not allow them to leap out of context.

Symphony 97 in C major is truly a grand work, and surely must have influenced Beethoven in its use of the C major triad as a motto theme, and many athletic scale passages for violins. Its particular surprise lies in the Adagio, where the violins have a fast detached passage marked 'sul ponticello', indicating bowing close to the bridge. This has a remarkable tonal effect when heard on Cappella Coloniensis' gut strings, a parallel to that produced by use of a damper lever or pedal on fortepianos. Another joke occurs in the coda to the dizzying Finale, where the over-worked strings grind to a halt, then issue a totally out of context loud pizzicato chord before sprinting for home.

This second volume of Bruno Weil's carefully prepared set of these miraculous London Symphonies has the same high production values of the first. With 36 players on period instruments, Cappella Coloniensis' complement is close to Solomon's rather large orchestra (for its day) of around 40. Their playing is flexible, beautifully articulated and conveys all the spirit, rhetoric and elegance of Enlightenment music.

Essen's live audience is astonishingly quiet, and their very presence somewhat dampens the fine acoustic of the Alfred Krupp Hall in Philharmonie Essen, giving an immediate and intimate sound. This orchestra has an unusual layout, with basses and cellos divided to sit on opposite outsides, giving a very symmetrical sound-field. Ars Produktion's engineering reveals the lovely period woodwind timbres and their harmonious relationship with the natural brass and gut strings, whose light classical bows produce wonderful spread-chording effects. There are a few light podium sounds from Weil, not disturbing.

As before, Ars includes a CD featuring an illustrated talk by the conductor and orchestra, discussing each symphony. This takes place in a more reverberant space, evidently with a smaller (and less disciplined) audience, and is an excellent feature for those with good conversational German. Its CD sound is markedly grainy compared with the SACD. The presentation is exemplary, with coloured photos of the orchestra in action, and very informative booklet notes on each symphony. I really like the cover art, each volume pairing Big Ben with a red icon of London - first a London bus, this time a red telephone kiosk. What next?

If you don't insist on hearing these symphonies from Big Bands with conductors such as Bernstein and Karajan, this growing set is proving to be indispensable, and in the best sound available. 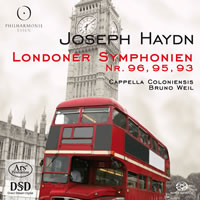 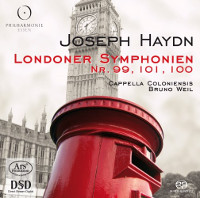 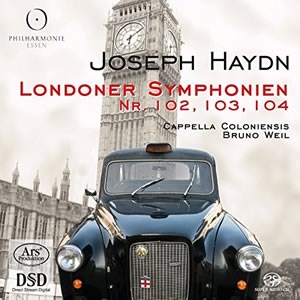