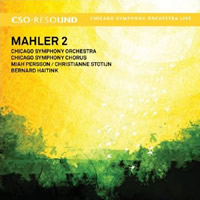 Bernard Haitink’s approach to the Mahler Symphonies is by now so well known that one should not be surprised to discover that this new recording of the 2nd Symphony produces no new insights, revelations or indeed shocks. Those who do not respond to the conductor’s un-showy interpretations, perhaps preferring the more neurasthenic and febrile performances of Bernstein or Solti will be disappointed by Haitink’s rather cool account of the first movement. Surprisingly at 21’12” it is faster than Gergiev, Fischer and MTT to mention just three recent recordings, but does not seem so. It is all so carefully moulded and immaculately played by the Chicago Symphony Orchestra on top form that some of the tension, spontaneity and excitement of the live occasion do seem to have evaporated somewhere along the line.

The second movement ‘Andante Moderato’ flows with an unaffected grace allowing appreciation of the Orchestra’s supremely polished playing. Strings possess a velvet-like sheen and Haitink’s control of rubato and dynamics is masterly. When the stormy central section arrives it hardly affects the overall untroubled mood of the movement. Surely there should be a little more sense of unease evident?

The ironic and often sinister scherzo that follows again seems far too polite and comfortable, and in spite of the deft playing there is little sense of any disturbing undercurrents below the surface of the music whilst the central section lacks a sense of wonder when compared with, for example, the mercurial Ivan Fischer on Channel Classics.

Things improve considerably with Christianne Stotijn’s lovely singing of ‘Urlicht’, which she delivers most movingly with an unforced simplicity and pure tone. Haitink’s hushed accompaniment and slow tempo allow Stotijn to communicate the words of the poem to full effect, and one cannot but marvel at the unanimity and depth of tone of the playing of the brass chorale that opens this movement.

With the long final movement the performance really catches fire. Haitink’s ability to manage huge forces combined with his command of the structure of a large symphonic movement really pays dividends. Not for him the quick thrill of the moment. He builds the music inexorably towards its zenith, starting with the march section, which is unleashed with elemental force. The contribution of the excellently drilled Chicago Symphony Chorus choir is magnificent, though the words ‘Bereite dich’ (Prepare yourself) need a more forceful delivery; here they sound more like a suggestion rather than a command. Later the ethereal voice of the wonderful Miah Persson joins that of Christianne Stotijn, and both voices entwine ecstatically as the work moves towards its conclusion.
The final minutes, with its panoply of bells and tam-tams combined with fanfares from the superb Chicago brass and underpinned by the organ, are overwhelming. Haitink definitely managed to keep something in reserve for this peroration that affirms his view of Mahler’s idea of ‘Resurrection’.

Disc 1 contains the1st movement of the symphony and Disc 2 the rest of the work. Both discs are enclosed in a single SACD jewel box directly on top of each other – not an ideal arrangement. The recording is very honest and natural with good depth that allows the many off-stage brass passages to attain the right perspective.

This is certainly the finest, and probably the last, of the many recordings Haitink has made of this symphony over his long and distinguished career. The honesty and objectivity of his interpretation is never in doubt yet many devotees of the composer will want just that little extra individuality from their Mahler, and for that they will need to look elsewhere.