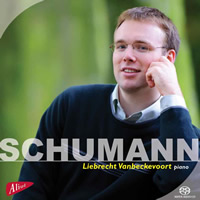 
The course of life of quite a few composers of the 19th century has a continuous appeal to people’s imagination. That also counts for Robert Schumann (Zwickau, 1810 – Endenich, 1856).

Being the son of a bookseller, he has literary ambitions, but Schumann says about this: « how strange it is that I, there where my feelings prevail, I have to stop being a poet ». He interrupts his law studies (in Leipzig and Heidelberg) – a wish of his mother’s inspired by material concern – to start a career as a pianist. He takes lessons with Friedrich Wieck in Leipzig, one of the best but also most notorious piano teachers of that time. Before there can be talk of a pianist career, his right hand becomes partly paralysed (while studying he would have fixated his third finger to make the fourth more independent and powerful). In the meantime he has fallen madly in love with Clara Wieck, a celebrated piano player and the daughter of his teacher. Father Wieck implacably exercises his veto against their relationship, causing years of psychological warfare between them. In the end, only a legal procedure makes it possible for them to marry.

Schumann completely fails as a conductor. He constantly knows periods of restlessness, despair, dejection and heavy depressions. A suicide attempt – during the depths of winter, he jumps into the Rhine river in Düsseldorf – results in Schumann ending up in a psychiatric institution, where he dies two and a half years later.

«…I worked on those 30 small, funny pieces, from which I have chosen twelve which I have called Kinderszenen. You’ll love playing them, but not as a virtuoso…», Schumann wrote to his beloved in 1838. Eventually it were thirteen of them. Thirteen short pieces which he afterwards all gave a title. They are thirteen jewels, and every one of them belongs to the absolute top of what has ever been written in the instrumental, monothematic miniature genre. They are disarming and intensely poetic, free of all external bravura, but as far as the composition technique is concerned, they are constructed in a particularly ingenious way. « A drop of music from the deepest source », Hans Pfitzer wrote about number 7, Träumerei; this comment applies for every piece of the Kinderszenen.

This was Liebrecht Vanbeckevoort's birthday present to Schumann in 2010, the 200th anniversary of the composer's birth. For a young concert pianist beginning to make his mark on the International stage, this is a well thought-out but ambitious programme. The three works cover the initial period of Schumann's romantic affair with Clara Wieck, herself a young virtuoso pianist. Clara's father, however, was implacably against their relationship, forbidding Schumann to see her, let alone court her. Schumann poured out his tormented soul in compositions penned during this period.

The F sharp minor piano sonata Op. 11 was one such vehicle for his emotions. This key is rarely used by composers and usually reserved for expressing the deepest feelings. Such is its powerful passion and technical difficulty, this sonata is performed relatively infrequently. Even Wilhelm Kempf avoided it in his "Complete" recording of the Schumann piano works for DGG. Despite having to send all her love letters to Robert, and claim hers back, Clara managed to hold on to the sonata's score, and played it in concert (1837) - "a cry from the heart to you", wrote Robert. The day after the concert, they were secretly engaged.

Significantly, the score's dedication to Clara is "from Florestan and Eusebius", These pseudonyms of Schuman's, reflecting the extrovert and introvert characters of his psyche, probably played a key part in the composer's final descent into insanity. In the introduction to the first movement, the pianist plunges both hands into the world of a tormented soul, full of zest and spontaneity as well as lyrical abandon.

Making direct comparisons with classic performances by Mauritzio Pollini, Angela Hewitt and Leif Ove Andsnes, Vanbeckevoort certainly has plenty of energy and forward momentum in the stormy outer movements, but there is sometimes a stiffness of rhythm, and a marked compression of dynamics compared with his peers - as with many modern pianists he tends to play a generalised mf in quiet passages, rarely achieving a true p or pp. In the Finale, where Pollini's staccato and rhythmic pulse is clearly depicted, Vanbeckevoort rather favours the movement's additional "maestoso" instruction, and his textures become somewhat muddy.

Kinderscenen, or Scenes from Childhood, was conceived to convey the musing recollections of childhood by adults, and its 13 miniatures are Schumann at his most poetically inspired. For me, it is Vladimir Horowitz who is the supreme interpreter here; his sense of "Innigkeit" (inwardness) and suspensefully hushed playing makes one hold one's breath. Vanbeckevoort unfortunately begins with an elementary error. In No.1 he emphasises the second (higher) note in each phrase, shifting the bar's rhythmic impulse and cheapening Schumann's exquisitely simple melody. I well remember having my knuckles rapped for this in piano lessons, and I can't believe no one has corrected him yet! His performance is dedicated and affectionate, but lacks many of the subtle expressive nuances which make Horovitz's and Hewett's performances so magically special.

Seeking respite from the fraught situation with Herr Wieck and those clandestine meetings with Clara, Schumann went to Vienna in 1838, bringing back several manuscripts. Faschingsswank aus Wien is a "great romantic sonata" and like the F sharp minor sonata it boils with passion and also portrays the political turmoil of the Austrian capital under the Metternich regime (Schumann sneaks in references to the banned Marseillaise). Somewhat neglected in the Schumann recording canon, it has had few true advocates, although Sviatoslav Richter was one.

To my ears, Vanbeckevoort gives the Faschingsswank the best performance on the disk, and probably one of the finest available. He avoids Richter's militaristic triumphalism in the first movement, playing with a real swing and forward momentum but in a slightly slower tempo, which allows him to describe the melodic arcs most effectively. The curiously dejected Romanze, with its drooping melodic lines, glows more colourfully than Richter's, Vanbeckevoort's Scherzino is more sneakily humorous than Richter's and his head-long Finale ("highest speed") gets him to live dangerously with thrilling effect.

At times one feels that Vanbeckevoort is indulging himself in the sound of the glorious piano and its friendly acoustic setting in the Concert Hall of the Royal Conservatory of Brussels. And well he might; the recording is magnificent, with rich growling bass, sonorous mid-range and crystalline treble. This has to be one of the best sonic presentations of a Schumann recital available at the time of writing, and the wonderful sonics of this disc considerably added to my enjoyment. The sound is something that Schumann himself could only dream of.

While there are certainly some issues with the performances, the programme as a whole works very well, and the Faschingsswank is excellent. Vanbeckevoort is at the start of his recording career, and I look forward to hearing how he tackles these pieces in a decade or so. Well worth exploring if Schumann's music is for you.