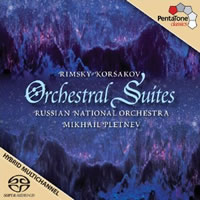 Rimsky-Korsakov: Suites from "The Snow Maiden" & "Invisible City of Kitezh", Night on the Triglav Mountain

About fourteen years ago Mikhail Pletnev and the Russian National Orchestra recorded a CD for DGG entitled ‘The Enchanted Kingdom’ that has been a favourite of mine since it was released. Besides music by Liadov and Tcherepnin it also included a fine performance of the suite from Rimsky-Korsakov’s opera ‘The Golden Cockerel’. Now the same artists have recorded an equally enticing programme, but this time in sumptuous SACD sound.

Apart from that mentioned above, none of Rimsky-Korsakov’s fifteen operas have become repertory pieces and are rarely performed outside Russia, the main reason being the composer’s inability to imbue the characters in them with convincing human emotions. He preferred to choose folk, mythological and fairy-tale subjects that allowed him to clothe them in glittering orchestral sonorities and music of voluptuous lyricism; both present in full measure on this SACD.

Probably the most familiar of the three suites recorded here is that from the ’Snow Maiden’. Rimsky-Korsakov based his opera on the play by A N Ostrovsky for which Tchaikovsky also wrote some enchanting incidental music. The atmospheric introduction, with its woodwind birdcalls and warm lower strings, indicates that we have here a recording of outstanding richness and depth, which proves to be the case throughout this SACD. This is followed by the ‘Dance of the Birds’ performed here in its purely orchestral garb without the women’s chorus sometimes heard in other recordings. A crisply played ‘Cortège’ with impressive RNO brass leads to the ‘Dance of the Tumblers’, which, though thrilling at Pletnev’s frenetic speed, does lose a little clarity towards the end.

The suite from the ‘Legend of the Invisible City of Kitezh and the Maiden Fevroniya’ is packed with attractive and atmospheric music, the equal of anything found in Rimsky-Korsakov’s familiar early orchestral works such as ‘Scheherazade’ or the ‘Russian Easter Festival Overture’. Pletnev and the orchestra give a stunning performance of this suite capturing both the excitement of the composer’s depiction of the ‘Tartar invasion’ and ‘Battle of Kershenets’ and the radiance of the ‘Death of Fevroniya’ that culminates in brass fanfares and the joyous pealing of bells as the opera’s heroine Fevroniya rises to Paradise.

Perhaps the most fascinating item on this disc is ‘Night on Mount Triglav’ a five-movement orchestral arrangement of the third act of the opera-ballet Mlada. In 1889 Rimsky-Korsakov attended performances of ‘The Ring’ in Bayreuth and was ‘astonished by Wagner’s handling of the orchestra’. Though Wagnerian influences abound in this work it is pure Rimsky-Korsakov at his most exotic and imaginative. The five scenes are played as one continuous movement although on this disc they are given separate tracks. The work is a depiction of a witches’ sabbath on the mountain, and an attempt by the evil gods Chernobog and Kashchei to ensnare the hero Jaromir by conjuring up the spirit of Cleopatra from the underworld. Pletnev’s performance revels in the sinuous and sensual orientalisms of Scene 4 (The Apparition of Queen Cleopatra) as well as the fiercely dramatic ‘Ronde infernale’, music that Stravinsky must surely have known when he composed his own ‘Danse infernale’ in ‘The Firebird’.

The venue in which the suites were recorded was not the orchestra’s usual Moscow studio but that of MCO, Hilversum in the Netherlands. This studio has an opulent acoustic that definitely further enhances the lushness of the music with a marvellous ambient glow. The Polyhymnia engineers have captured all the kaleidoscopic colours of Rimsky-Korsakov’s rich orchestral palette in state-of-the-art sound that will delight all audiophiles, and it is to be hoped that Pletnev’s vibrant and sympathetic performances will bring this captivating and often resplendent music to a much wider audience.