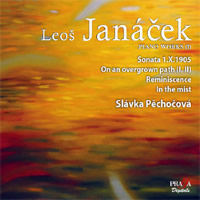 Leos Janáček: Piano Sonata in E flat minor 1.X.1905 (“From the street”), On an overgrown path, Reminiscence, In the mists


Just like Dvořák, Janáček played the organ, especially from 1875 to 1905, more than the piano, even though he mainly composed at the keyboard after the death of his daughter Olga. He left only a few masterpieces, short works or cycles juxtaposing real or imaginary dialogues and marked by considerable differences in affectivity and dynamic. Their language—questioning, amorous, exalted, desperate or violent—forms a sort of dreamlike counterpoint to his fantastic operatic repertoire. Slávka Pěchočová’s playing reflects the rigour of her first teacher, Martin Hršel, and the almost-Impressionistic expressiveness of her second, the famous Professor Ivan Moravec.

Leos Janacek (1854-1928) is arguably the greatest Czech composer of the C19th. His operas, symphonic works and some of his chamber music regularly appear on concert programmes. Yet his piano works remain the province of keyboard connoisseurs. In fact Janacek had a genius for writing in the genre; his ability to portray the depths of our human condition, well seen in his operas, becomes intensely personalised in his many short character pieces for piano. In these, he follows a tradition set by Schumann, Brahms (the late piano pieces), Debussy and even late Scriabin in their impressionistic miniatures.

Having studied speech rhythms in Czech, and collected many Czech and Moravian folk songs, Janacek's musical language is highly distinctive. His piano music is often awkward to play, especially for non-Czech players, and also looks dauntingly awkward on the printed page. He tends to set bars in eighth-notes, with time signatures such as 2/8, 3/8 and so on, which makes it difficult to determine the phrasing of his pleasingly simple melodies - which also often end on a short note without a cadence. Unusual poly-rhythms abound. He favours keys with many flats, and frequently side-slips into remote keys with a more emotional aside, before returning abruptly.

All these technical difficulties are easily overcome by his finest interpreters, including Rudolph Firkusny, Ivan Moravec and recently, Leif Ove Andsnes. On the evidence of this first volume in her forthcoming complete set of Janecek's piano works, I would add Slavka Pechocova to this list. Indeed, one of her teachers was Moravec, and not surprisingly some of her interpretations resemble his, but she has developed her own wonderfully fluent and eloquent version of the composer's special language. Without artifice or exaggeration, she captures the simplicity and naiveté of his folk-like melodies, but responds passionately to Janacek's more stirring and dynamic utterances.

The curiously named Sonata 1.X.1905 ("From The Street") refers to a traumatic event in Czech history. On October 1, 1905, a student demonstrating for the founding of a Czech university in Brno was killed by Austrian troops. In both of the surviving movements, the music is filled with unexpected surges of emotion. In a fit of impulsive anger, at the piece's final rehearsal before its première, Janacek seized the third movement pages from the performer, tore them up, and burned them. Later he symbolically cast the whole autograph into the River Moldau. Fortunately, his first performer had made copies of the remaining two movements, and when she played the truncated Sonata to him again in 1924, he finally agreed to public performances.

As well as the seminal Sonata, the first volume includes Book 1 of the collection 'On an Overgrown Path' (1901-1908). Largely inspired by the composer's grief on the premature death of his daughter Olga, 'On An Overgrown Path' is a moving collection of piano miniatures. There are ten pieces in the First Book, all with very evocative titles (one is called 'Unutterable Anguish') and others have whimsical titles about Nature. All are character studies reflecting Janacek's acute perceptions of the world around him. The Second Book (1902-1911) has five pieces with more abstract titles ('Album Leaf' and ' Paralipomena' "left-overs"), but the titles hide some unusual and utterly beautiful gems. Some readers might know this music from its memorable inclusion in the 1988 film 'The Unbearable Lightness of Being'.

'Reminiscences' is dated from the 1880s, yet has much of the composers later style. Its lovely tunefulness is easily negotiated by pianists of even moderate technical ability. Finally come the four masterpieces of 1910 in 'In the Mist'; veiled melodic lines of longing and pain, yet ultimately the unsettled composer seems to reach some form of reconciliation.

Rudolf Firkusny reported that when practising the piano music before Janacek himself, the composer often became enraged and rushed forward to correct the tempo, which was generally too slow for him. Comparing the performance times of pieces by Andsnes, Moravec and Firkusny shows an interesting example of the general tendency for slowing down of musical tempi during the C20th. The slowest by far is Andsnes, consistently faster by up to one or even two minutes than Firkusny (which is a lot in movements often much less than 10 mins in duration). Slavka Pechocova, like Moravec, comes in between these timings, leaning towards the swifter end of the range. Her playing sounds entirely natural and unforced, subtly nuanced with great understanding and empathy towards Janacek's style.

Praga's engineers have produced an exemplary DSD capture which fully meshes with the impressionistic nature of the music. The Martinu Concert Hall in Prague provides a responsive ambience which gives an impressive glowing halo to the piano sound. Slightly distanced, although we can still hear the sustaining pedal list, Janacek's most prevailing mid-range textures are still fully detailed. When the composer's passion arises and the music thrillingly moves into the low bass regions, the hairs rise on the back of the neck as the gravitas of the sound reinforces its emotional impact.

The booklet is well-supplied with information (albeit some quite technical). I can't wait for the next volume; this superb first issue by Slavka Pechocova will be a significant contribution to Janacek's recorded piano music, and undoubtedly the finest-sounding one so far. Don't miss this!