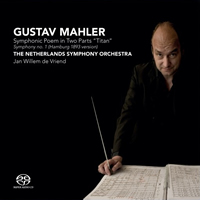 
The first performance of the Symphonische Dichtung in Zwei Abtheilungen (Symphonic Poem in Two Parts), later his First Symphony, was conducted by Mahler in Budapest on 20 November 1889. It got a cool if not hostile reception, mainly because of the ‘bizarre, vulgar and cacophonic extravaganza’s’ of the last two movements. At least this was how it was felt, with the public and the critics in bewilderment especially after the finale’s unsurpassed ferocity. The final chords were followed by utter silence, until a few members of the audience hesitantly began to applaud, quickly interspersed with demonstrative sounds of disapproval. Mahler left the hall in devastation, roaming through the dark streets, like an ‘outcast’. Such hostility we cannot imagine anymore with this wonderful music today.

The version which is used on this recording is the 1893-restored version. It comprises two parts and five movements. Part one, called ‘Aus den Tagen der Jugend’: (From the Days of Youth): ‘Blumen-, Frucht- und Dornstücke’ (Flower-Fruit-and-Thorn-Pieces), contains the first three movements: 1. Spring goes on and on; 2. Andante – allegretto (‘Blumine’) and 3. Scherzo (‘Full Sail’). Part two, ‘Commedia umana’ (Human comedy), consists of 4. Funeral March in Callot’s manner and 5. Finale: From Inferno to Paradise.

Here we have a fascinating musical document in a recording which is both splendidly performed and realistically engineered. Mahler began his symphonic output at the age of only 28, his conducting career already established from a succession of posts in European opera houses. An avid reader of Romantic literature, his favourite novelist was Jean Paul (1763-1825). The young composer was greatly attracted by the novel entitled "Titan", which intriguingly mirrored his internal conflicts. Its lengthy and complex plot also obliquely satirised Romanticism, but Mahler found himself identifying with one of its heros.

In 1888 he began his "Symphonic Poem in Two Parts". It was premièred at Budapest in the following year (where Mahler was music director of the Hungarian National Opera). At this stage, we now know that the work already had a descriptive programme on the title sheet of its MS, but the audience was simply given a list of the five movements:

The audience and critics responded well to the first section's nature painting and peasant dances, but were repelled by the "bizarre, vulgar and cacophonic extravaganzas" of the second section. Mahler was deeply wounded, and it took three years before he began revision. He was by then principal conductor at the Hamburg Stadttheater and anxious to perform it there. By Jan 1893 he had completed the revision and discarded the second movement ('Blumine'), derived from some incidental music he had previously written to a dramatic poem about a trumpeter by Joseph Viktor Scheffler. It is interesting to note that Jean Paul writes in "Titan" of Music being "moonlight in the gloomy night of life", and Mahler happened to have had this evening serenade with a trumpet handy. However, with the proposed performance looming, in August Mahler restored the 'Blumine' movement, and produced an expanded programme note for the audience:

The MS of the 1893 version only came to light in in 1966; this is the version recorded here. The audiences in Hamburg (and shortly after, Weimar) were confused by the programme, which Mahler ruefully deleted, and later he removed Blumine again, at the same time beefing up the orchestration considerably (the 1893 version uses only a typical Romantic orchestra of triple woodwind, four horns, three trumpets and trombones). One immediately notices in the 1893 version that Mahler first used horns, not clarinets, to play the fanfares at the opening of the First Movement, and that in the Funeral March, the solo string bass is accompanied by a solo cello, giving it a hollow sound. Apart from a number of such changes in orchestration, the musical substance was hardly altered, apart from adding short repeats in the first and third movements.

Jan Villem de Vriend is well-known for his work with period orchestra Combattimento Consort, and he brings this experience to his performance practises as the artistic director of The Netherlands Symphony Orchestra. The score is shorn of interventionist intrusions often applied by Mahlerite conductors to the final version of the First Symphony, and de Vriend makes use of the lighter textures of this early version to open up ear-tickling counter-melodies and thematic references which Mahler buried in the music. Not just the two songs from 'Songs of a Wayfarer' in the first movement and the well-known 'Brother Martin' or 'Frére Jacques' canon, but motifs from Liszt's 'Dante Symphony' and Wagner's Parsifal in the finale are on display. These musical as well as literary influences clearly point the context for the development of this amazing first symphonic work.

Sheer quality of playing and fine recording are evident in the breathtaking first few hushed moments of sw Vriend's first movement. The NSO conjure the suspenseful stillness of a forest dawn in a vast space more convincingly than I have heard before, even making Kubelik's classic version sound somewhat prosaic. When the forest episode returns in retrospect near the end of the finale, the atmosphere is pure magic.

The NSO's orchestral winds make the most of their greater relative prominence in a score with less heavy brass than they have to cope with in the final version of Symphony 1. Alll the strings play idiomatically and sweetly, their massed tone digging in to the peasant dances of the Ländlers in the third movement, and adding full-toned lustre to the Finale's drawn-out love theme. The opening explosion of sound and emotion in the Finale itself is impressive, de Vries keeping up a good pace and not letting the tension relax.

This version allows us to hear the controversial 'Blumine' movement in its proper context, not just inserted into a performance of the final First Symphony version. Here, its charm is undoubted: a lovely trumpet solo unfolds with a cornet-like tone and its gently moonlit murmuring accompaniment is beguiling. But Blumine's origin as a piece of poetic incidental music is, however, rather given away, and one can sympathize with Mahler's decision to finally relinquish it.

Thanks to Northstar's magnificent engineering on behalf of Challenge Classics, the sonics match the inspired playing and direction. Their mission statement is to provide "an optimal realistic and holographic, 3-dimensional representation of the musical instruments, voices and recording venue", and that is precisely what is on offer here, if you have the equipment to do it justice. The sound achieved is broadly comparable to that given to MTT's San Francisco Mahler series, with a somewhat larger ambient contribution because the Musiekcentrum, Enschede, Netherlands was not filled with a sound-absorbing audience. Despite the hall's full resonance, which is used artfully in the many distant brass sounds required in the score, there is no really noticeable loss of detail at climaxes, where the brass and percussion, particularly the startlingly profound bass drum, are given their collective heads. The 5.1 MC track gives one an uncanny illusion of being in a seat in the mid-stalls. Capture was from Sonodore mics to DSD with dCS Converters.

An important issue for Mahler lovers, despite the many competing Mahler cycles. This is something off the beaten track, which teaches much about Mahler's symphonic evolution. The booklet notes also encourage further exploration of the crucial part which Mahler's literary studies played in the development of his psyche and his own creative artistry. Highly recommended.