I don't love the Hickox Vaughan Williams cycle - I find this a somewhat uninspired rendition of RVW's #2, and I'm not a fan of the recording either. The Rochester/Seaman is a ... 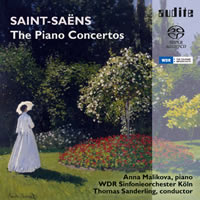 Outside France, Camille Saint-Saëns (1835-1921) is still perceived as a composer of charming show-pieces and grandiose orchestral works such as the “Organ Symphony”. However, the oeuvre of this universal French musician and cosmopolitan of such broad interests reveals many other fascinating sides. From grand opera, through film music, to the “Zoological Fantasy” (as he subtitled his Carnival of the Animals) he examined every genre. By studying his forbears, Saint-Saëns developed a “classical” style for the nineteenth century, though never losing romantic lyricism and a direction towards modernism. Saint-Saëns viewed his five piano concertos in particular as fields for experimentation.

“The solo part of a concerto must be conceived and treated as a dramatic Character”, according to the composer who was also a successful pianist. With his first concerto the 22-year-old had already caused a great stir amongst his audience who remained enthused until the premiere of his fifth piano concerto in 1896. Saint-Saëns rearranged the traditional sequence of movements, improvised long solo passages à la Bach and quoted melodies from North Africa, his favourite holiday destination during the last decades of his life (he died in Algiers in 1921). This complete recording of his piano concertos, written in the space of four decades, presents a portrait of a composer who, with his extreme and masterly craftsmanship, is waiting to be rediscovered.

Audite has reissued its previously released two discs of Saint-Saëns Piano Concertos in a convenient slim dual jewel box. Saint-Saëns (1835-1921) was one of the most amazing childhood prodigies in musical history. He gave his first public concert as a pianist at the age of 10, including a concerto by Mozart, and went on to play the whole set of Beethoven piano sonatas from memory at a series of recitals. His photographic memory enabled him to absorb scores with a single glance. He also studied philosophy, astronomy, biology and archaeology.

Touring as a virtuoso well into old age, he also conducted. He left no musical genre unexplored, even film music. But he was particularly drawn to concertos as his most experimental field, writing around 30 of them. The form was neglected in France, being regarded as too Germanic, and particularly with his five piano concertos, Saint-Saëns set out to produce new and truly francophone models. It is fascinating to listen to these piano concertos in sequence; they span more than 40 years, about half of his musical career. Initially informed by the classics of Haydn, Mozart and Beethoven, his view of Romanticism determined to aim for clarity, simplicity, balance and conciseness, as antidotes to the excesses of prevailing late Romantic styles. Each of these concertos abounds with his fertile imagination and abundant melodic gifts, and although mostly staying within the bounds of the classical three-movement format (except for the very experimental fourth concerto) movement by movement they are delightfully unpredictable.

Perhaps the best modern set of the Saint-Saëns Piano Concertos on RBCD is the multi-award winning Hyperion version by Steven Hough with the CBSO under Oramo. Anna Malikova and Thomas Sanderling take a more relaxed tour, slower then Hough in most of the movements by up to 1 minute. This does not indicate any slackness by Malikova and Sanderling; their approach is to let the music speak for itself rather than driving it hard. Malikova wears her virtuosity lightly, all Saint-Saëns' myriad technical problems are taken in her fluent, sympathetic and expressive stride; she has plenty of steel where strong rhetoric is called for (not too often in these concertos) and a real feel for Saint-Saëns' phrasing of long melodic lines.

Sanderling and the WDR Symphonieorchester Köln provide sumptuous and rhythmically vitalised support; these are not adversarial concertos but more about partnership, which is amply demonstrated. The orchestra are on top form, with characterful wind solos (smoky bassoons and plangent oboes) and a cello section which sings its heart out. All together, this SACD set is a real competitor for Hough and Oramo for those who prefer time to savour the many felicitous pianistic and orchestral colours which these concertos provide.

Malikova plays a Shiguru Kawai EX piano, famed for its fast action, range of tone colours and amazing ability for projection. It develops tone faster than the Steinway action, and in place of the famous Steinway "roar" from its bass region, it has a noble but transparent bass tone, ideal for correctly sounding Saint-Saëns' dense left hand chording (meant for the lighter pianos of his day). The piano/orchestra balanced is managed very well, with a vivid and immediate sound-stage in the Philharmonie, Köln. Orchestral sound rests on a well-defined and extended bass register, especially from the string basses. My only sonic niggle is that although there is air around the sound, it does not quite expand fully at the loudest climaxes, where there is a touch of congestion from the fairly close microphones.

Every collector's library should have a set of the Saint-Saëns, and despite not having the room for the three "encores" that Hough and Oramo provide, this is a very rewarding and entertaining set, well worth consideration. 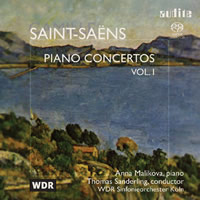 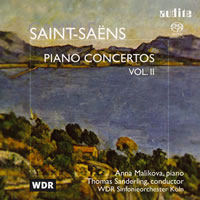