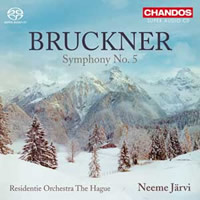 
Symphony No. 5 is widely considered as the finest among the nine numbered symphonies of Anton Bruckner, and ranks among his most famous works.

In their first recording on Chandos for almost ten years, the Residentie Orchestra The Hague here performs the work under its chief conductor, Neeme Järvi, who has conducted the symphony with orchestras across the globe, and is recognised as one of the key interpreters of it.

The reputation of the Residentie Orchestra The Hague as one of the finest orchestras in Europe makes it an appropriate figurehead for The Hague as a cosmopolitan city of justice, peace and culture.

To give readers an impression of why this reading from Jarvi is not attractive, here are some competing accounts and their durations:
Bruckner: Symphony No. 5 - Harnoncourt - 73 minutes
Bruckner: Symphony No. 5 - Wand - 77 minutes
Bruckner: Symphony No. 5 - Janowski - 74 minutes
Karajan's BPO DG account (a personal favourite for which I dearly wish Pentatone to find and license quad tapes!) - 81 minutes
Furtwangler's 1942 BPO account - 68 minutes
In fact, if one looks at the discography of the symphony here: http://www.abruckner.com/discography/symphonyno5inbflat/, the shortest for the version used by Jarvi (not stated so presumably must be either Haas or Nowak) is 66'30 (William Steinberg). Jarvi despatches this work in a little over 62 minutes, well 5 seconds over to be precise and some of this time is the decay of reverberating chords.

In the first movement, the timings are suggestive of the problems encountered: at under 18 minutes, the opening Adagio is given little time and space to find a level of solemnity or grandeur such as Wand or Harnoncourt find. Worse is to come, for in the second movement marked "Adagio. Sehr langsam" - which should leave conductor and audience in no doubt about what was intended - Jarvi waltzes through it in 11'15! This is compared to Harnoncourt's fairly fast 14'57, Wand's 16'24 and Karajan's titanic 21'34. Needless to say, it doesn't feel very slow (because it isn't) and all the glory of the fermata's and string chorale figures are completely lost in this performance. The Scherzo is also fairly fleet of foot but not excessively so and is easily the best conducted movement on the disc. The finale starts far too fast in the 'adagio' introduction and the weight is once more absent. The main body of the finale fares better but again Jarvi feels compelled to continually push forwards when it is not needed or even remotely hinted at by the score. Miraculously the final glorious chorale isn't rushed off it's feet and has a modicum of poise and grandeur but that is the most praise one can lavish upon the conclusion.

What makes this such a crying shame is that the Residentie Orchestra The Hague play out of their skins - music such as this (in the outer movements) is hard at much slower tempos than these and yet the brass and woodwind still acquit themselves with honour. Such tempos though really take their toll on the tone quality afforded to the strings; they do marvellously but at such flowing speeds, there is little anyone could do to better their response in the adagio's. The recording too is wonderful but sadly in the context of things matters little - rarely has such wonderful technology and playing been lavished on such a poor performance.

To repeat myself, oh dear.