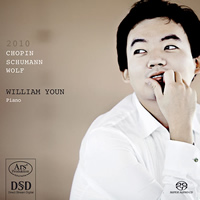 William Youn, the latest pianist to join the Ars Produktion stable, is rapidly developing a strong and varied concert career world wide. He has given solo and chamber recitals in such international venues as New York’s Lincoln Center, Disney Hall in Los Angeles, the Vienna Musikverein, the Palacio de Bellas Artes in Mexico City, the Palau de la Música in Barcelona, Madrid’s Auditorio Nacional de Música, the Seoul Arts Centre, the Baden-Baden Festspielhaus and the Chamber Music Hall of the Berlin Philharmonie.

Orchestral engagements have included concerts with the Cleveland, Mariinsky Theatre and Seoul Philharmonic orchestras, the Halle Staatsorchester, the Südwestdeutsche Philharmonie of Konstanz, the Nürnberger Symphoniker, the Württembergische Philharmonie of Reutlingen, the Belgian National, Toronto Philharmonia and Prague Philharmonic orchestras as well as a number of festivals. He has also featured some HIP recitals using a fortepiano. Youn is embarking on a CD series with Mozart’s piano works for Oehms Classics. The first CD, featuring four sonatas, will appear as a co-production with Bavarian Radio in September 2013.

Although he made some earlier records with Sony Korea, this recital is his first solo recording for Ars Produktions (his true debut with them featured the two Chopin piano concertos (Chopin: Piano Concertos 1 & 2 - Youn, Riehle). The programme of the present disc is his salute to several composers whose anniversaries occurred in the year of its issue (2010); Chopin, Schumann and Wolf.

Youn's opening Chopin group is led by Nocturne Op. 27 No. 2 in D flat major, a model Chopin reverie, is one of Chopin's greatest tributes to Bellinian Italian Opera. Youn plays this love duet with sumptuously rich and mellow tonal colours and singing lines with subtle rubato, expanding passionately in the nocturne's passionate central section. Three very familiar mazurkas from Op. 59 lie at the very heart of Chopin's Polish nationalism and are essays in Chopin's late style; lush and fluent. Youn illuminates them with inner fire; the A minor with its wistul, plaintive lyricism, the A flat ripely melodic and the great F-sharp minor a fine finale with its whirling dance, ending simply and with the least rhetoric.

Chopin's Polonaise-Fantasie Op. 62 is undoubtedly a masterpiece in its vivid lyricism and contrast of modes, although its loose structure is less convincing than the other Polonaises, making this one of Chopin's most challenging pieces for any pianist. Youn's version captivated me even more than Pollini's classic one, which now sounds positively desiccated compared with the richly detailed Steinway sound from Ars Produktion. Its striking opening gambit is truly regal, and generally Youn's vision holds together Chopin's potentially rambling format with a sense of forward momentum which is most revealing.

Schumann's Davidsbündlertänze (1837) is a group of 18 pieces named after his imaginary music society, the League of David, formed to defend the ongoing cause of contemporary music against its detractors. Eusebius and Florestan were named as its two main members, representing respectively the introspective (feminine) side and the extroverted (masculine) side of the argument. The character pieces (not all of them are strictly dances) end with 12 low C's to signify midnight and the end of the Society's revels.

While this is a generally very well-played performance; robust, full of character and strong contrasts, Youn omits a significant number of internal repeats in many of the pieces, something which was fashionable in the late C19th and early C20th, but nowadays is regarded as heretical in some quarters.

Unless the listener is a player with the music in his or her head, this dodging of some repeats will only be spotted by those following with a score, so most listeners need not worry greatly. The usual result of omitting repeats is to distort the composer's structural proportions. I assume that Youn has some logical scheme for deciding which repeats to omit, but I couldn't detect any obvious design. The whole affair is interesting, since Schumann himself produced a revised second version, in which he added more repeats, presumably for structural balancing purposes. Most pianists use a hybrid version of their own.

Hugo Wolf (1860-1901) is well-known for his peerless sets of lieder, but he also has a significant body of solo piano works, which are hardly ever recorded, and rarely appear in recitals. Youn presents us with two splendidly charming miniatures, a glowing Schlummerlied and an impish Scherzo & Spiel. The recital is given an applause-worthy conclusion with Wolf's Paraphrase of The Mastersingers (c.1880). Wolf was a devoted follower of Wagner, and together with a Die Walküre Paraphrase was using the form to praise the master publicly. For the Mastersingers. Wolf used Tausig's arrangement of Schott vocal scores with piano reduction.

Naturally there are plenty of occasions for Youn to exhibit his bravura, and he tries to suggest Wagner's orchestrations as far as a Steinway will let him. There are some of the usual tremolos supplied by Wolf, but much of the arrangement is very clear and stratospheric, ending (appropriately) magisterially. It is great fun to see how many of the opera's highlights and melodies one can spot.

Despite some reservations, mainly about the repeats in Schumann, this is a most enjoyable presentation of a somewhat unusual programme. Ars Producktion engineers present a most realistic piano sound in an all-enveloping warm acoustic. If you are intrigued by the programme, this disc is well worth searching for - ignore the unflattering photo of William Youn on its cover.