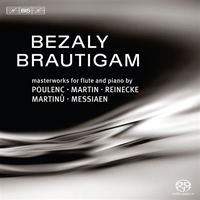 
From Carl Reinecke's Undine Sonata, composed in 1882, to Poulenc's 1957 Flute Sonata this disc brings together five central works in the repertoire for flute and piano, covering a wide range of styles and approaches. Reinecke's work is a musical re-telling of the well-known story of Undine, the water spirit who marries a knight, but is betrayed and takes her revenge on him. Frank Martin's virtuosic Ballade (1939) features an acrobatic flute cadenza, roaming melismas and irrepressible cascades, generating a compelling sense of drama.

In 1945, while in exile during the German occupation of Czechoslovakia, Martinů composed his Flute Sonata, in which the virtues of his distinct musical language are plain to hear - lyrical lines, a rhythmic drive which is both energetic and lively and an effective use of tone colour. Six years later the bird-lover Messiaen composed Le merle noir, constructed around the song of the blackbird, which he painstakingly noted down and then found the means to imitate on the flute. Poulenc's melodic Sonata, finally, has become a signature work for its composer: its lightness, transparency and sonic refinement have charmed audiences ever since the first performance.

Presenting this substantial programme is Sharon Bezaly, one of today's leading flutists, supported by the eminent pianist Ronald Brautigam. The same performers have previously released a highly acclaimed duo disc which Classic FM Magazine described as 'compulsively listenable … Prokofiev's Flute Sonata has never sounded so perkily seductive on disc, nor has Schubert's enchanting set of variations given up its secrets so readily'. In agreement with this, website Classics Today.com wrote: 'On the evidence of this sensational disc, it seems clear that Sharon Bezaly is a flutist virtually without peer in the world today'. 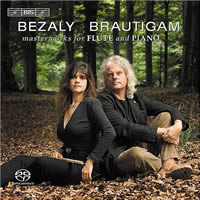