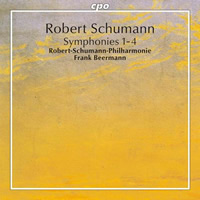 »How would it be if I simply left everything just as Schumann had written it down and did not try from the very beginning to have an interpretive opinion?« Frank Beermann, an avid explorer and discover – and thus an ideal cpo interpreter! – certainly would not have undertaken a new recording of the universally renowned Schumann symphonies without a special motivating impulse. Initially, it was curiosity that occasioned him to engage in renewed reading of the scores in the edition by Joachim Draheim. In the process, he reached the conclusion that the ballast sometimes found to burden this music has it origins not so much in the scores as in the history of their interpretation. For his recording Beermann sought to trace Schumann’s musical path while availing himself of all the resources offered by a full-size, modern orchestra. And this orchestra, the Robert Schumann Philharmonic of Chemnitz, knows what their fellow Saxon, whose name they honor, merits and needs: a committed, rousing performance clearing the ears and immediately rendering audible why the discovery label cpo has ventured into mainstream waters on this production – yes, because this new interpretation is a discovery! 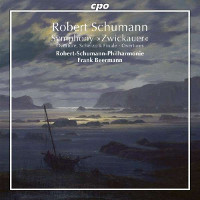