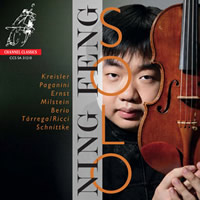 
Unlike the piano, the king of instruments, only a small percentage of works has been written for solo violin. As everyone knows, a piano recital is a recital for solo piano. A violin recital, however, is usually a duet for violin and piano. Since the violin is mainly a single-melody-instrument, it is always a special challenge for the violinist to study the solo works, simply because most of them comprise both the melodic line and the accompaniment normally given to the piano.....


Although it was a tradition in classical music for centuries that performer and composer were one and the same person, this custom sadly faded in the twentieth century. But we are fortunate in having some of the greatest masters of the violin, including Kreisler, Heifetz and Milstein, who composed or arranged many pieces for their instrument. Although Kreisler composed few solo pieces except his cadenzas for a number of violin concertos, his Recitative and Scherzo-Caprice is surely one of the most popular pieces among all those famous Viennese desserts. And the Paganiniana by Milstein, so cleverly based on variations by Paganini, forms a violin master's tribute to the all-time iconic violinist.

On this new recording, aptly and accurately entitled 'Solo', Ning Feng widens the range of his choice of repertoire to include major pieces for solo violin from two of the 20th century's most iconoclastic composers, Luciano Berio and Alfred Schnittke as well as intriguing rarities from the 19th century.

Feng's recital begins with 'Paganiniana', a wonderful set of variations on the last and most famous of Paganini's '24 Caprices' written by by Nathan Milstein. In an astonishing display of technical wizardry for the violin Milstein also includes quotes from other Paganini pieces including the 1st Violin Concerto. Francisco Tárrega's 'Recuerdos de la Alhambra' that follows is most often encountered as a piece for guitar, but this arrangement by Ruggiero Ricci most effectively transfers Tárrega's haunting tremolo study to the violin. The delicacy and precision of Feng's playing in this short piece is absolutely captivating.

Berio's 'Sequenza VIII' from 1976 is, at 15'.23”, the longest and most challenging work on this disc. It is a free chaconne derived from the notes A and B and, as Feng acknowledges in the booklet notes, is not “easy listening”. In what is probably an extreme, though possibly not untypical reaction to this piece, a friend to whom I played this recording of it said that he would prefer to spend two hours in a dentist's chair than listen to it again. Nevertheless, whatever one's reactions to the music may be, one could hardly imagine a more compelling and brilliant performance of it than that given here by Feng.

Perhaps somewhat surprisingly, Schnittke's 'A Paganini', a homage both to the composer and his demonic image is much more approachable, even on a first hearing, thanks to the vivid imagery the piece evokes. Feng's breathtaking technique and mesmerizing playing really brings this piece to life.

The other four works that complete the disc are Paganini's own witty 'Duet for One Violin', Kreisler's 'Recitative and Scherzo – Caprice' and two enjoyable curiosities by one of Paganini's pupils H W Ernst (1812-1865).These are an arrangement of Schubert's well-known ballad 'Der Erlkönig' and a set of fiendishly difficult variations on 'The Last Rose of Summer' that surely would have any audience on its feet cheering if played like this in a concert.

Channel's recording, made in Doopsgezinde Kirk, Deventer, The Netherlands, is vivid and lifelike.
Though it is quite closely miked there are no extraneous noises from either Feng or his instrument and the pleasing ambience of the church captured in surround further enhances the listening pleasure to be experienced from Feng's enthralling performances.

Those who purchased Feng's earlier disc will need little encouragement to acquire this one. Newcomers should try to hear this marvellous disc without delay. 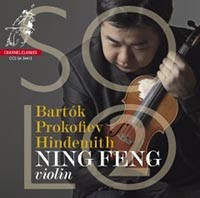