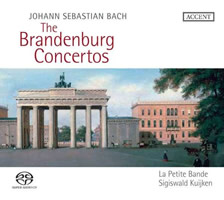 A decent but not inspirational account of these wonderful pieces.

As Geohominid observes very accurately, Bach: Brandenburg Concertos 1-4 - Fasolis and Bach: Brandenburg Concertos 5-6, Triple Concerto - Fasolis have an awful lot going for them and very little to be said in the negative. I have personally found them extraordinarily powerful accounts that breathe new life into what all too easily become museum pieces but some might find the sheer joie de vivre and power a little over bearing given the rather civilised manner of playing that so many have adopted throughout the recorded history of these works. Personally though, I'd pack these for the proverbial desert island...

Interestingly, all of Kuijken's notes are devoted to the rationale for recording the pieces for a third time - rather a shame given the illuminations provided in the Cantata series. His most important reasons are that he only uses 1 player per part in the first two concertos and that he has had a set of Baroque "violincello di spalla" built and they are employed throughout. They give a far lighter sound than Fasolis' I Barocchisti and make for far easier late night listening where neighbours are concerned!

He opens his account with the 3rd concerto, where it has to be said that La Petite Bande sound almost exactly that! They are not helped by a distant recording (clear though it is) or a more pedestrian tempo in the first movement than I Barocchisti. A major plus point though is the extemporisation of Luis Otavio Santos between the two allegros - far more interesting than most performers. Honours in the second Allegro are far more evenly divided, with listeners able to choose freely; La Petite Bande are more polite and restrained (especially in the bass clef - quite possibly reflecting the di spalla instruments) and do not appear so rushed (which Fasolis' players flirt with thrillingly to these ears but possibly too much so for others).

Next up is the 5th concerto which Kuijken elects to have a total of 7 players, including the 3 superb soloists Sara Kuijken (violin), Barthold Kuijken (transverse flute), Ewald Demeyere (harpsichord - but a lighter model than many choose to employ); this contrasts with Fasolis' decision to employ an ensemble of 13 in addition to his soloists. The lightness of texture has immediate benefits for the clarity of lines as well as the feeling that we are floating on air in the first movement. Whilst not taken more slowly than many, some listeners might the middle movement a little four-square and literal with little imaginative flair on display from the crucial soloists - indeed some phrase endings almost sound like movement conclusions; a great shame for the third movement really dances away with quite some grace.

Closing the first disc is the 1st concerto, where as in the 5th concerto, Kuijken employs one player per part (entailing a total of 13 here compared to 22 of I Barocchisti). Understandably, the strings have a far slighter body of tone and volume (especially in tutti passages) that will not appeal to all tastes - sampling especially here is encouraged. Curiously though the horns are balanced in rather a backwards fashion - they cannot surely have been so quiet as this and their timbre suggests editorial rather than musical direction. As regards tempo and phrasing, these are given fairly middle-of-the-road choices and whilst nothing will offend, neither will anything set the pulse racing. This is especially true when compared to Fasolis' exhilarating account where the second Allegro is approached attacca with such a vibrant crescendo that the tension is almost unbearable; here it merely feels dutiful. In total Kuijken manages to take nearly 15% more time than Fasolis without any appreciable gain in relaxed expression. Mention should also be made that the horns used are "natural" and occasionally their tuning sounds a little awry compared to the rest of the ensemble and those of I Barocchisti who also use natural horns.

Opening the second disc is the 4th concerto with fine playing, coincidentally adopting almost identical choices as Fasolis. The difference really is the size of ensemble (9 here vs. 15 on Arts) and the weight of tone from the type of cello - di spalla really does seem to matter, although as Kuijken himself admits, there are no firm ideas about the dimensions surviving.

Following this is, even by Bach's own exalted standards, a work of pure genius - the 6th concerto in B flat. Kuijken adopts a somewhat relaxed tempo to the first movement but it never drags and one cannot fail to be moved by the music. In many ways, the relaxed mood makes this perfect music for listening to late at night.

Concluding the set is the 2nd concerto with stunning writing for trumpet that never fails one to pause and contemplate the majesty of the music. Kuijken's trumpet soloist here is Jean-François Madeuf and he is admirably able to contend with the myriad of difficulties although one notes that in (easier) places, the intonation alters slightly for the worse. Once again the ensemble size is pared down to the bare essentials and here is one of the most valuable gains of the set for the clarity is astonishing and at no point does one feel that the balances leave the strings undernourished. Likewise his tempo choice in the slow movement is exemplary and one feels that Fasolis, having skirted controversy in the remainder of the set and largely avoided such a fate, is guilty here of robbing the music of its character by setting such a sprightly tempo.

The recording is good but has some decidedly unwelcome features, such as recessed horns (they are more noticeably manipulated than any other instrument) but other than that is wholly unremarkable in either a positive or negative manner.

In short, this will not be replacing the superb Fasolis accounts but it will be kept for reasons of hearing the violincello di spalla, for they make the music as refined as some have tried to present it in the past. 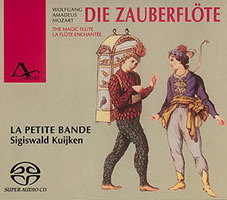 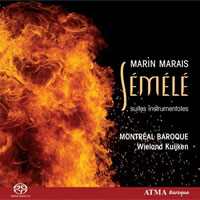 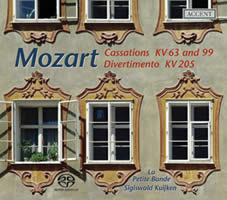 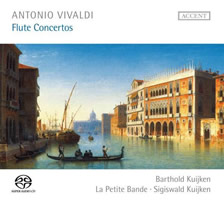